The hunt for partially hydrated electrons 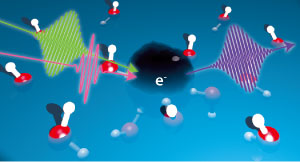 Figure 1: By combining two light beams, it is possible to detect an electron on the surface of water. Reprinted with permission from Ref. 1. Copyright 2016 American Chemical Society.

From biology through to physics, boundaries and surfaces are the sites of some of the most significant interactions and transformations. RIKEN researchers have developed a spectroscopic technique to probe the processes taking place at a very important and fundamental boundary—the interface between air and water. Using this technique, they have detected the dramatic behavior of single electrons at the water surface1.

The spectroscopic technique developed by the researchers is called heterodyne-detected vibrational sum-frequency generation (HD-VSFG), and it detects chemical species on the surface of water. Like infrared spectroscopy, it uses light to identify the molecules present in a sample via the characteristic wavelengths of light they absorb.

In VSFG, two light beams combine to generate a third beam of light whose frequency is the sum of the frequencies of the two incoming light beams. This combined light beam carries the signals of the chemical species present (Fig. 1). “This light mixing process occurs only in regions where the ‘upward’ and ‘downward’ have different natures,” explains Tahara. “At the air–water interface, the upward area is the air, while the downward area is the water. Consequently, VSFG signals are generated only at the interface.”

The researchers shone ultraviolet laser light at the water surface, which causes electrons to split off some water molecules. Using HD-VSFG, they noticed a very short-lived signal in the spectral region that corresponds to stretching of the oxygen–hydrogen bond. The researchers confirmed that this signal indicates the vibration of water molecules that hydrate newly formed electrons at the water surface.

Furthermore, the team showed that these electrons were only partially hydrated, rather than fully surrounded by water molecules as they are below the surface. The HD-VSFG results revealed that partially hydrated electrons are highly unstable, escaping into the bulk water to become fully hydrated within 100 picoseconds (10−10 second) of forming.

“Observing hydrated electrons is just the first step,” Tahara says. “Because our new method can be utilized to study chemical reactions at liquid interfaces in general, we will be able to unveil dynamics and mechanisms of interfacial reactions that are almost unknown at the moment.”