Sending bone growth down the spine 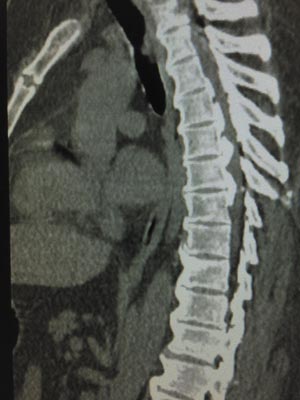 Figure 1: People with the spinal disorder ossification of the posterior longitudinal ligament (OPLL) of the spine have aberrant bone growth in the spine. © Spondylolithesis/ iStock/ Getty Images Plus

For the first time, RIKEN researchers have shown how a genetic mutation increases the risk of a spinal disorder, which is prevalent throughout Asia.

Ossification of the posterior longitudinal ligament (OPLL) of the spine is a degenerative disease that afflicts more than 2 per cent of people in Japan. It results when bone starts developing in the soft tissue of the spinal cord, leading to nerve compression, pain and numbness—debilitating symptoms that can affect daily life.

Over the years, scientists have found several gene variants that occur more often in people with OPLL, but it was not known definitively if or how any of these genes contributed to the patients’ aberrant bone growth. So a team led by Shiro Ikegawa at the RIKEN Center for Integrative Medical Sciences tested the role of one potential susceptibility gene, known as RSPO2.

The team previously conducted a comprehensive gene sleuthing study, which found six sites in the genome that seemed to confer disease risk. One of these genomic segments included the gene RSPO2, which carries the instructions for making a protein called R-spondin 2. The protein was known to play a critical role in skeletal development, but the researchers wanted to drill deeper into how RSPO2 works at a molecular level. They used mouse and human bone precursor cells to examine gene expression in a lab dish.

They showed that RSPO2normally acts to put the brakes on bone formation. Its presence inhibits the development of the early cartilage cells, which are later replaced by bone cells. However, the gene variant linked to OPLL decreases gene activity by changing the promoter region—the ‘on switch’—of RSPO21. Specifically, the disease-associated variant alters the binding of a transcription factor, which would otherwise allow RSPO2expression and thereby halt bone growth. Without this binding, stem cells in the spinal cord get misdirected into bone.

“Our findings provide new insights into the etiology and pathogenesis of OPLL, as well as a new target for treatment of the disease,” says Masahiro Nakajima, who led the study. If drug companies can find a way to block the pathway unleashed by low RSPO2 expression, Nakajima explains, they could help improve the lives of people with the disease.

The team plans to investigate the role of other potential OPLL genes in search of additional drug leads. “We believe it is possible to find other causal variants and susceptibility genes using the same approach,” Nakajima says.