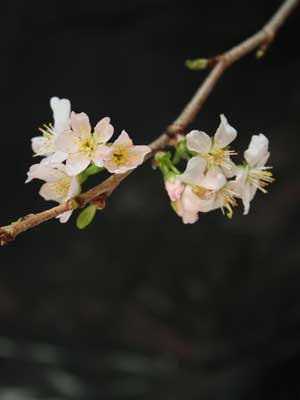 Nishina Otome is a heavy-ion bred cherry blossom that flowers all year round. © 2016 RIKEN

“These tearless, non-pungent onions will not only wipe tears away from the kitchen and the food processing facilities, but also will add a new dimension to the enjoyment of onion recipes around the world.” This was the proud prediction of a team of Japanese researchers, including Tomoko Abe at the RIKEN Nishina Center for Accelerator-Based Science, in April 2016, in a paper describing the use of heavy-ion beams to breed sweet-smelling onions. Japanese curry company House Foods Corporation has since begun selling the onions as ‘Smile Balls’.

But Abe has more than onions to smile about. Two decades ago, she became the first researcher to use a heavy-ion accelerator to generate mutant organisms. In that time, her group has invented a bright-pink petunia, a deep-red dahlia and a seedless verbena with many flowers that can be admired for a long time. More recently, they have begun producing new varieties of extremely nutritious, healthy and potent plants, fungi and single-celled organisms, from salt-resistant rice to hypoallergenic peanuts and sweet wormwood that produces increased amounts of a compound that kills malaria parasites. 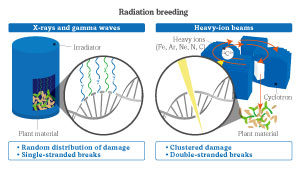 X-rays and gamma rays cause less permanent mutations than heavy-ion radiation in the DNA of plant material. © 2016 RIKEN

Mutations are the catalysts of genetic diversity. They occur spontaneously in nature, contributing to evolutionary processes that have shaped millions of species. Over millennia, plants and animals have developed many unique qualities that humans have exploited. Early explorers would travel exhaustively in search of exotic spices, legumes and herbal elixirs. Eventually, humans learned how to cultivate desirable traits, whether by selection and interbreeding, genetic modification or even controlled mutation.

Mutation breeding dates to the early 1920s, when American geneticists discovered x-ray radiation could increase the rate at which genomic errors appeared in fruit flies, barley and maize. Other techniques were later developed, such as gamma rays and chemical triggers of mutagenesis, to achieve as much genomic variation as possible without killing the cultivars. However, these techniques took days to months to make stable mutations because they introduced breaks only to one strand of the two-stranded DNA molecule, which could be easily repaired by the cellular machinery.

Abe found a way to irreversibly break both strands of DNA, creating mutations within seconds. In 1991, soon after joining RIKEN, she went to visit the RIKEN Accelerator Research Facility (RARF) during the annual public open day. The RARF housed the largest cyclotron in the world, capable of accelerating heavy ions to half the speed of light to produce a swathe of irradiation, 8 centimeters in diameter, with a uniform distribution of intensity and sufficient energy to penetrate tissue. It had been a tool for physicists for years, but Abe wanted to use it to breed plants.

The particle accelerator turned out to be an excellent mutant generator, and Abe spent the next few years determining which ions produced the optimal number of errors for which species: lighter carbon ions were ideal for cracking shorter genomes of Arabidopsis thaliana, for example, and heavier neon ions for longer rice genomes. In one hit of radiation, Abe could jumble the codes of hundreds to thousands of seeds, or other plant material. The plants were then grown on plots of land across Japan through a network of close to 200 companies, universities, prefectural and national government bodies, and monitored for any marvelous feats or curious features. When mutants were found, they were cloned.

An estimated 3,200 radiation-bred varieties of plants have been formally recognized worldwide. Half of these were produced using gamma rays, one-sixth with x-rays, one-tenth doused in chemicals, and less than a hundred under heavy-ion radiation. Abe’s group alone has produced 30 varieties that are either in the market or close to being launched.

The first plants were sold commercially in 2001 at a central wholesale market in Hiroshima. They matured into large dahlia flowers with deep-red petals. “The warm color was ideal for the winter season,” says Abe. And with the entire country heating up over the FIFA World Cup they were hosting with South Korea the following year, it seemed appropriate to name the dahlia ‘World’.

Abe’s team have collaborated with farmers to create many attractive varieties. In 2007, they produced the first cherry blossom trees with pure, pale-yellow petals. ‘Nishina Zao’ was named after the founding father of modern physics in Japan—Yoshio Nishina—and the Zao mountain ranges in central Japan, where the original sakura trees grow. “Our customers now wish for blue cherry blossoms,” says Abe, who has seen a mutant with bluish-tinted blossoms under fluorescent lighting. “It isn’t quite blue yet.”

Timing is a critical factor for spring sakura gazing in Japan, but in 2009, RIKEN released a variety that could blossom all year round. ‘Nishina Otome’ was a hit, especially as a centerpiece in traditional flower arrangements during the winter New Year holidays. 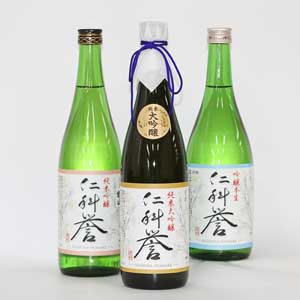 In more recent years, Abe’s focus has shifted from floral beauties to high-value crops. Her team worked with the Saitama Industrial Technology Center to create yeast that is used by 20 breweries across Saitama prefecture to ferment flavored rice wine. “They have a distinct sake smell, and taste expensive,” she says. The team has also modified fast-growing algae to contain more fats and oils. Mass-production of the lipid-rich water plants could offer a commercially viable and sustainable source of biofuels.

Soon after the devastating tsunami washed over Japan’s eastern coast in 2011, Abe collaborated with a local government office and Tohoku University to test salt-resistant rice varieties on the seawater-contaminated paddy fields. One irradiated strain of a local grain called Manamusume (the farmer’s dear daughter) had higher yields than a staple strain. Since 2014, RIKEN has been collaborating with two other large accelerator facilities in Japan—TIARA and W-MAST—through the Cross-Ministerial Strategic Innovation Promotion project funded by the government to develop higher-yielding varieties of rice.