The height of accuracy 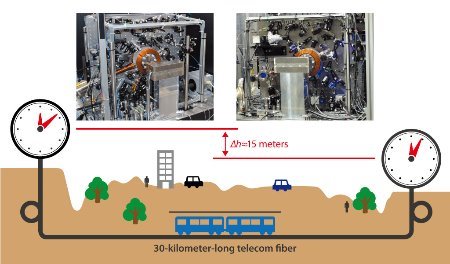 Figure 1: By using two ultraprecise clocks separated by 15 kilometers, researchers at RIKEN and the University of Tokyo were able to measure their height difference to be about 15 meters within an accuracy of 5 centimeters. Adapted by permission from Macmillan Publishers Ltd: Ref. 1, copyright (2016)

Researchers at RIKEN have created two clocks so accurate that they can be used to measure the difference between their elevations, even when separated from each other by 15 kilometers1. The clocks could eventually be used to monitor seismic activity.

Using clocks to measure height differences, rather than just time, may seem bizarre, but it is a natural consequence of Einstein’s general theory of relativity, which predicts that the passing of time depends on the gravitational field. For example, a clock on the summit of Mount Everest will run ever so slightly faster than one at sea level, causing it to gain roughly 1 second every 30,000 years. So by measuring the differences in the times of two sufficiently accurate clocks, it is possible to estimate the difference in their heights.

By exploiting this effect, Hidetoshi Katori of the RIKEN Quantum Metrology Laboratory and co-workers measured the height difference between the two ultraprecise clocks to be about 15 meters, within an accuracy of 5 centimeters. This measured height difference was consistent with independent measurements made using conventional techniques for measuring elevation.

The clocks, known as optical lattice clocks, have been developed by the team over the last decade. They
were linked to each other by an underground optical fiber (Fig. 1). “This is the first time that such
ultraprecise clocks have been connected between distant laboratories,” comments Katori.

Another implication is that such clocks could be used to realize what Katori calls an “internet of clocks”—a network of ultraprecise clocks. “Such a clock network would function as a geopotential meter that can be used to monitor the motion of massive objects underground,” explains Katori. This would allow scientists to monitor changes in seismic activity. If the network can be extended to a global scale, it could aid cosmologists’ search for the elusive dark matter predicted to exist in the Universe.

The team has even loftier goals for the future. “By further improving the optical lattice clocks, we hope to demonstrate millimeter-level chronometric leveling in 2 to 3 years,” says Katori. “In the future, we dream of replacing conventional height benchmarks by networked clocks.”