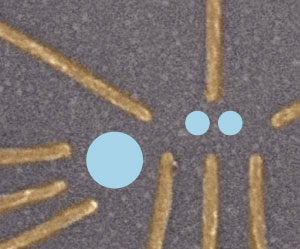 A device created by RIKEN researchers demonstrates that it is possible to realize the building block of quantum computers in ordinary, ‘garden-variety’ silicon used in the modern electronics industry1.

While many candidates for generating qubits have been investigated, those that use the rotation of an electron (its ‘spin’) confined in a nanostructure are the most promising for realizing compact, scalable devices.

To facilitate the uptake of this technology, these qubits should be compatible with the materials and processes currently used in the electronics industry. Previous work had shown that the operation of spin qubits can be improved by using forms, or isotopes, of silicon that contain more neutrons than the most common form of silicon. But it would be expensive to introduce such exotic isotopes of silicon into commercial electronics manufacture.

Kenta Takeda, Seigo Tarucha and their colleagues at the RIKEN Center for Emergent Matter Science have developed a spin qubit in industry-standard ‘natural’ silicon. They achieved this by confining an electron in a so-called double quantum dot, which traps two charged particles between electric fields generated by electrical contacts (Fig. 1).

The ideal qubit must be pliable enough to quickly change state on demand, but sufficiently robust that it maintains this state for as long as needed to perform computational tasks.

“Because qubits use sensitive quantum states, they are susceptible to noise from the environment,” explains Takeda. “To protect the qubit states from noise, it is necessary to perform quantum error correction. But this works only when the fidelity—a common figure of merit for qubits—is high enough.”

The team improved the fidelity of their device by using a micromagnet to speed up qubit operation. The micromagnet generated a magnetic field large enough to induce strong coupling of the spins of the two trapped electrons. This is vital because, unlike other semiconductors such as gallium arsenide, silicon does not have an intrinsic spin driving mechanism. The micromagnet allowed the researchers to control the spin in their double quantum dot 100 times faster than previously possible.

“In this work, we achieved fault-tolerant fidelity for single-qubit operation,” says Takeda. “We hope next to demonstrate high-fidelity two-qubit operation to build up universal quantum computers.”