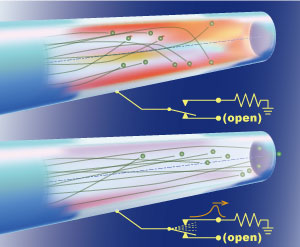 Figure 1 Top: Charge builds up on the capillary wall, deflecting highly charged ions and preventing them from exiting the capillary. Bottom: By placing a mechanical switch, or relay, behind the opening of a tapered glass capillary discharges the excess charge and ensures a stable flow of highly charged ions, which could be used for analysis and modification of material surfaces. Reprinted from Ref. 1, with the permission of AIP Publishing.

Highly charged ions formed by stripping multiple electrons from neutral atoms can be powerful probes for analysis and modification of material surfaces. But difficulties in producing steady submicron beams of such ions have limited their usefulness. Now, RIKEN researchers have overcome this problem by modifying humble glass tubes1.

While highly charged ions such as Ar8+ can be easily produced by applying microwaves to a chamber filled with gas, conveying them as a microbeam to a target is much more challenging. “The ions are so hungry for electrons that they strip them from surfaces before reaching the target,” explains Tokihiro Ikeda from the RIKEN Nishina Center for Accelerator-Based Science. “Consequently, we have to get them to the sample without touching anything.”

Combinations of slits and electromagnetic lenses are normally used to focus ion beams into a micrometer-scale spot, but they are not effective with highly charged ions because the ions can interact with the slits, losing some of their charge in the process. “Experimentalists grumble if the ions in a beam have different charges,” says Ikeda.

With his colleagues Tomoko Abe and Takao Kojima, along with other researchers, Ikeda has overcome this limitation by using narrow glass capillary tubes that are tapered at one end. For the first few seconds, the highly positively charged ions interact with the glass surface, depositing positive charge on the insulating inner walls. These positively charged walls then reflect subsequent incoming ions, except for those that travel through a narrow corridor down the center of the glass tube. The tapered end of the capillary causes it to act as a lens that enhances the ion density by a factor of two to three in the nanosized focus spot. 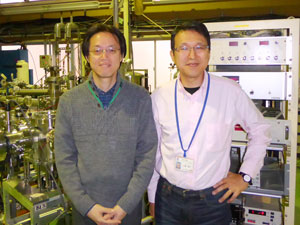 Figure 2: Tokihiro Ikeda (left) and Takao Kojima (right) in front of the system they used to study the generation and transportation of highly charged ions. © 2016 RIKEN

It has been known that the beam transmission sometimes became unstable because the amorphous glass surface leads to patches of charge where too many slow-moving ions accumulate and deflect incoming particles from the direction to the exit. To overcome this, the researchers invented a scheme to actively discharge excess charge to a ground connection by placing a mechanical switch just behind the tapered opening (Fig. 1). By tuning the dynamic discharge rate to ensure sufficient charge remained on the surface for guiding, the team was able to produce intense beams that remained stable for hours for the first time.

“The physics community has suffered from a lack of reproducibility due to insulators interacting with charged particles,” says Ikeda. “This method can help with charge-up problems. I believe that researchers and companies from unexpectedly different fields might be interested in our method.”