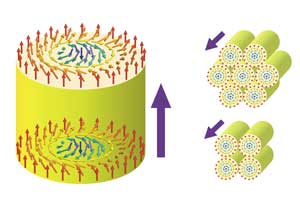 Figure 1: Left: Skyrmions are whirling patterns in the magnetic orientations of atoms. Under an external magnetic field (purple arrows), atoms on the outside of the skyrmion align their magnetic moments (red) with the field, while those at the core of the skyrmion point in the opposite direction (blue). Right: Skyrmions can stack up to form a triangular (‘honeycomb’) or square lattice. Reprinted by permission from Macmillan Publishers Ltd: Nature Materials (Ref. 1), copyright (2017).