Putting a block on dot-to-dot 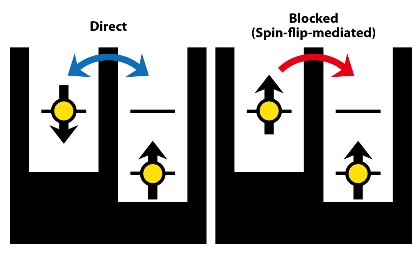 Figure 1: When the spin, represented by arrows, of the electrons in the two dots are different (left), direct tunneling is possible. But the Pauli spin blockade makes tunneling more difficult when the electrons have the same spin (right). Reprinted with permission from Ref. 1. Copyright (2017) by the American Physical Society.

The quantum processes that determine the operation of single-electron devices have been uncovered by RIKEN scientists1. This knowledge will help optimize these components as building blocks for future quantum computers.

Quantum dots are tiny islands of material that exhibit interesting electrical and optical properties because they contain only a few hundred atoms.

Seigo Tarucha from the RIKEN Center for Emergent Matter Science and co-workers created a device that contains two quantum dots. By probing the device, they established the fundamental processes that determine its speed and effective operation.

The quantum dots were made by depositing metal contacts less than 100 nanometers wide on the semiconductor gallium arsenide. An electron could be trapped between the dots by applying a voltage to the contacts. The dots were spaced close enough that an electron could move from one dot to the other through tunneling—a quantum process by which small particles can overcome barriers that are impenetrable to classical particles.

The team monitored this tunneling in real time and found that it occurred on two time scales, which correspond to two underlying mechanisms (Fig. 1).

The first mechanism is straightforward direct tunneling. It can occur when the electrons in the two dots have opposite spins (a fundamental property associated with an electron’s rotation). Since the electron’s spin remains the same during this process, it is called spin-conserving tunneling.

Two electrons with the same spin cannot exist in the same quantum dot due to the Pauli exclusion principle, which prohibits two electrons in a quantum dot from having identical sets of quantum numbers. This phenomenon is known as a Pauli spin blockade. In this case, tunneling can happen only when preceded by a ‘spin flip’, which makes the process slower.

“This spin blockade effect can be used to manipulate electron spins,” says Tarucha. “The blockade’s robustness significantly affects the fidelity of quantum operations, but the underlying physics is not yet fully understood.”

The ratio between the two signature times that characterize the tunneling process varied with the strength of an applied magnetic field. The researchers developed a theory that fully accounted for these observations, which gave them insights on how best to increase the effectiveness of the Pauli spin blockade. In particular, they suggest that the device’s operation can be optimized by applying a magnetic field along certain in-plane directions.

This knowledge can be applied to processes required in real systems, such as reading out the spin state of an electron in a dot. “We will apply this spin blockade model to the quantum gates needed for information processing,” says Tarucha.