Probing the stability of photosynthesis 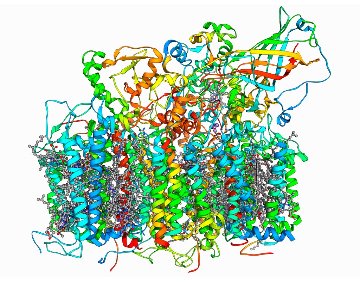 Synthetic systems that reveal and reproduce some of the secrets of how nature uses sunlight to split water have been developed by RIKEN researchers.

Scientists have long dreamed of being able to efficiently split water into its constituents elements—oxygen and hydrogen. Such technology would provide a green, cost-effective way to produce hydrogen, which many consider to be the fuel of the future. But the weak link in current methods for splitting water is oxygen production at the anode—the most energy intensive step of the process.

Nature might be able to offer some helpful clues for overcoming this problem. The first stage of photosynthesis in plants involves using sunlight to split water molecules into oxygen, hydrogen ions and electrons. This reaction is catalyzed by a highly reactive cluster of one calcium and four manganese ions that lie at the heart of photosystem II—a complex array of proteins and other chemicals (Fig. 1). These manganese ions are stabilized and functionalized by parts of the amino acid molecules that surround the manganese cluster and make up photosystem II.

Scientists have mimicked nature and used manganese-based catalysts surrounded by organic compounds to split water. But unlike the amino acids in plants, the organic compounds used in artificial systems are unstable, being oxidized by the positive charges produced during electrolysis.

“Photosystem II is one of the most risky enzymes, since it generates the highest oxidative potential in nature, making it liable to self-decompose,” explains Ryuhei Nakamura of the RIKEN Center for Sustainable Resource Science. “The key question of this study is how photosystem II handles such a high oxidative potential. We believe that discovering how nature achieves such a high activity and stability is very pertinent to designing catalysts for commercial applications.”

Nakamura and co-workers used a mass-spectroscopy technique to study the stability of organic compounds in a synthetic counterpart of photosystem II and also compared them with the natural system1. They discovered that of the three kinds of organic groups that surround the manganese cluster in photosystem II, carboxyl groups (CO2−) are the most effective in stabilizing the complex in its artificial counterpart and also increasing the water oxidation activity by facilitating electron and proton transfer.

This discovery will inform scientists working on artificial photosynthesis. “We hope this work will provide a new design rationale for making artificial systems that can split water and generate fuels such as hydrogen and hydrocarbons,” says Nakamura. “We are already collaborating with possible commercial partners, with a view to developing viable applications.”