Solving the case of the missing x-rays 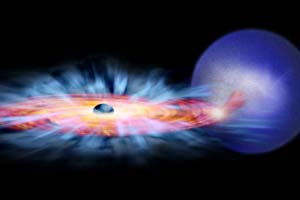 In 2005, NASA’s Rossi X-ray Timing Explorer (RXTE), an x-ray satellite, spotted a black hole in the act of devouring its companion star. Yet the pair, a binary system called GRO J1655–40, was emitting far fewer x-rays than expected. A model developed by RIKEN researchers has revealed the whereabouts of the missing x-rays1. It could also help to explain key processes inside the disks of matter that swirl around rapacious black holes.

In general, the more gas streams from a star into the accretion disk around a neighboring black hole, the more electromagnetic radiation is emitted. Although ground-based telescopes saw that GRO J1655–40’s accretion disk was emitting more visible and infrared light, RXTE’s observations showed that x-ray emission was dropping.

“Something outside the x-ray-emitting region must have been blocking some of the x-rays,” explains Megumi Shidatsu, a member of RIKEN’s MAXI team.

Shidatsu and her colleagues calculated that the x-rays are being obscured by a ‘disk wind’, a stream of gas ejected from the outer parts of the disk at over 100 kilometers per second (Fig. 1). They believe that x-rays emitted from the inner parts of the disk strip electrons from atoms in the disk wind, leaving it highly ionized. When more x-rays collide with these electrons, they are scattered—a process called Compton scattering. 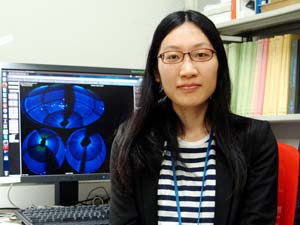 Figure 2: By comparing observational data and their own model, Megumi Shidatsu and colleagues Chris Done and Yoshihiro Ueda have discovered the source of missing x-rays in a binary system consisting of a black hole and a star. © 2017 RIKEN

The team’s model used a range of data about the binary system—including the black hole’s mass, the disk’s diameter and the amount of matter falling into the black hole—to predict its x-ray emission if there were no obscuring wind. Unlike previous models, it calculates visual and infrared emission from the outer parts of the accretion disk as well as x-ray emission from the inner parts, accounting for increases in the temperature and thickness of the outer parts due to x-ray heating.

The researchers compared data from RXTE and ground-based telescopes with their model to see how much the wind was blocking these x-rays. “One remarkable conclusion is that the number of atoms in the wind that are located in our line of sight is much larger than previously estimated,” says Shidatsu. “Our results suggest that the wind can have a substantial amount of almost completely ionized gas.”

The heating caused by Compton scattering may be responsible for powering the disk wind. The same effect could occur in similar binaries. “We plan to search for such dense disk winds in other x-ray binaries using our model,” says Shidatsu. The team also hopes to study disk winds in more detail using proposed Japanese and European x-ray satellites.