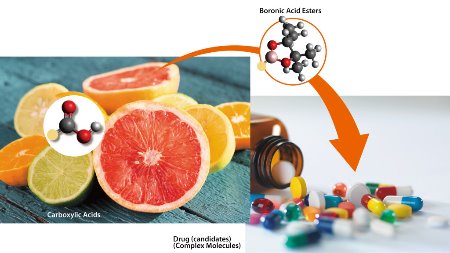 One of the most powerful ways of forming complex organic molecules such as pharmaceuticals, agrochemicals and other functional materials is to use ‘metal-catalyzed cross-coupling reactions’. Unfortunately, such reactions are very picky about their starting materials, requiring reagents that contain one of a select set of functional groups that cross-coupling catalysts can recognize.

The team selected a large family of molecules called aromatic carboxylic acids as the starting materials for producing boronic esters (Fig. 1). “Carboxylic acids are found in a broad range of molecules and are thus easily available,” says Takamitsu Hosoya from the RIKEN Center for Life Science Technologies, who led the work.

A mild method for converting carboxylic acids would thus open up a way to produce a diverse set of boronic esters for cross-coupling and a range of other transformations. But previously discovered methods typically require temperatures of 150 degrees Celsius or above, which can destroy sensitive starting materials. 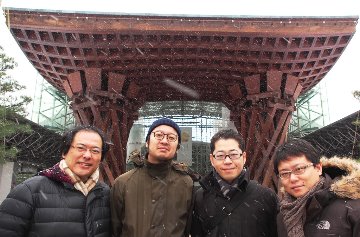 Hosoya and his co-workers suspected that converting the carboxylic acid group into a more reactive derivative would make it easier to displace it with boron under mild conditions. They initially tried common carboxylic acid derivatives such as acid chlorides and acid anhydrides but found them to be too reactive and unstable.

However, a sulfur-containing derivative called a thioester proved to have just the right level of reactivity. Using a rhodium catalyst, the researchers were able to convert thioester into the desired boronic ester at just 80 degrees Celsius.

“Testing the reactions on a wide range of carboxylic acids, we discovered that our method has a superb substrate scope, which includes densely functionalized compounds,” Hosoya says. “These results convinced us that our method would be applicable to the late-stage derivatization of complex molecules, which is a useful method for drug discovery.”

The method developed by Hosoya and co-workers is currently limited in that it works well only for carboxylic acids attached to aromatic substrates, such as benzene rings. “As ‘aliphatic’ acids are much more ubiquitous than aromatic ones, we believe that developing borylative transformation of aliphatic carboxylic acids is important and highly desirable,” Hosoya says. The team showed one example of an aliphatic borylation in the current study, but its reaction efficiency was low. “We are now working to realize this transformation by refining our catalytic strategy,” he says.