Smaller is better for water-splitting catalyst 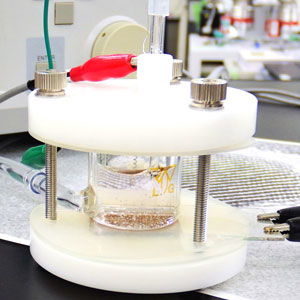 Figure 1: The experimental setup the researchers used to split water. The bubbles in the beaker are oxygen gas. © 2017 RIKEN Center for Sustainable Resource Science

Splitting water into oxygen and hydrogen is a very attractive way of converting renewable energy sources into the ultimate clean energy source—hydrogen. It is something that plants do very well in photosynthesis, but scientists have struggled to produce artificial systems that have efficiencies approaching those of plants.

Now, by using manganese oxide crystals smaller than 10 nanometers, researchers at RIKEN and Seoul National University in Korea have uncovered an unexpected catalytic pathway that promises to realize water-splitting reactions in the lab with efficiencies edging closer to those of photosynthesis1.

Of the two reactions involved in water splitting, the problematic one is the oxygen evolution reaction, which plucks four protons and four electrons from two water molecules. Researchers have been searching for catalyst that accelerates this reaction. One natural target is the protein complex photosystem II. This biomolecule allows the reaction to proceed under mild conditions with sunlight, thanks to its cluster of calcium and manganese ions.

Further exploration revealed a curious enhancement of activity when the manganese oxide nanoparticles were shrunk. The researchers saw that crystals smaller than 10 nanometers stabilized Mn3+ species on their surfaces during the demanding electrolysis process. To understand these effects, they sought to capture the chemical behavior of the nanoparticles in action.

“With four electrons and four protons being transferred, this reaction mechanism is really complicated,” concedes Nakamura. “We had to improve the sensitivity of our tools to detect the species present on the nanoparticle surfaces.”

The researchers pinned down the differences between conventional manganese catalysts and their nanoscale counterparts using high-resolution structural measurements under the action of electrolysis. While bulky catalysts had trouble extracting an initial electron to set off the oxygen evolution reaction, the nanoparticles showed no such issues, and even snatched an additional proton. This new mechanism enhanced the catalytic output by making it easier to attract charges from water.

Nanoscale distortions of crystal lattices can induce electronic differences in materials; Nakamura suspects this may be occurring in the tiny manganese oxide catalysts. “This could support ideas about splitting water with abundant elements such as manganese, instead of the platinum or iridium catalysts widely used today.”