RIKEN and the Max Planck Society signed an agreement on April 27, 2011, to strengthen their collaboration by establishing a joint research center for systems chemical biology, a field that seeks to achieve a systematic understanding of biological systems from a chemistry perspective.

The joint research center will bring together the RIKEN Advanced Science Institute's natural chemical compounds bank NPDepo, Natural Products Depository, and BIOS, the biology oriented synthesis library belong to the Max Planck Institute for Molecular Physiology, Department of Chemical Biology, to create one of the world's leading chemical compounds bank of both synthetic and natural compounds. The agreement also calls for strengthening the ongoing collaboration on disease glycomics and oligosaccharide synthesis between RIKEN ASI's Systems Glycobiology Research Group and the Max Planck Institute of Colloids and Interfaces.

By bringing together their complementary technology and experience and working in close collaboration, RIKEN and the Max Planck Society hope to transcend the boundaries between different research fields to achieve a comprehensive understanding of life phenomena. It is also hoped that the resulting exchange of personnel, both young researchers and students, will foster the development of the next generation of scientists.

RIKEN and the Max Planck Society (MPG) have been cooperating in a diverse range of fields including physics, chemistry and biology for more than a quarter century since they first entered into a collaborative agreement in June 1984.

To celebrate the 25th anniversary of their cooperation, RIKEN and MPG held a joint conference January 21-23, 2009, covering their collaborations in the three fields of physics, materials science, and the life sciences. The conference was held at the MPG headquarters. At this conference it was decided that an invaluable global resource for chemical compounds could be created by combining two chemical compound banks owned by the Max Planck Society and RIKEN. These are the BIOS (Biology Oriented Synthesis) library of synthetically produced chemical compounds owned by the Chemical Biology Department, headed by Herbert Waldmann, of the Max Planck Institute for Molecular Physiology, Dortmund, and the NPDepo (Natural Products Depository), RIKEN's bank of naturally produced chemical compounds belonging to the Chemical Biology Department headed by Hiroyuki Osada at RIKEN's Advanced Science Institute (ASI).

On January 19, 2010, Noyori Ryoji, RIKEN president, and Kohei Tamao, director of the RIKEN Advanced Science Institute (ASI), visited President Peter Gruss of the Max Planck Society. It was agreed in this visit that the cooperative ties between RIKEN and the Max Planck Society should be strengthened and developed, and to this end a Memorandum of Understanding was signed between the two institutions for research collaboration in the field of systems chemical biology. This agreement led to research involving the exchange of researchers and students, and in February 2010 a RIKEN-Max Planck joint research team was created in preparation for the establishment later of a joint research center.

As discussions on the proposed joint research center progressed, it became clear that significant breakthroughs in glycobiology could be achieved through collaboration between the Max Planck Institute of Colloids and Interfaces, headed by Peter Seeberger, and known for its automated oligosaccharide synthesis technology, and RIKEN ASI's Systems Glycobiology Research Group, headed by Naoyuki Taniguchi. It was then decided to create a joint research center that would support and foster the expected synergetic effect of these two groups working together and sharing information.

The joint research center will carry out the mutual exchange of research samples, and provide a forum for the exchange of young researchers and graduate students. By sharing their chemical compound libraries, as well as automated oligosaccharide synthesis and other technologies, RIKEN and MPG hope to build the research platforms needed for systems chemical biology and the elucidation of life phenomena from a chemistry perspective. Joint symposiums will be held every year to further discussions and stimulate collaborative research. The activities of the new center will not be limited to its current two teams, but will be organically expanded over time so as to create new science and technology originating with Japan and Germany.

The foundation of the RIKEN-Max Planck Center raises the cooperation between our two organisations to a new level that corresponds to the intensity and scope of our 25-year collaboration. It is good to know that in RIKEN we will have a trusted, reliable and scientifically highly-competent partner in Japan. I can see an exciting future for cooperation in the field of systems chemical biology, where each side can contribute its strengths for the benefit and success of both.

It is a great honor to establish a joint research center with the world-famous Max Planck Society. I am pleased that our two organizations, and two countries, have joined forces in this way just when we are celebrating the 150th anniversary of Japan-Germany relations. Japan has just experienced the worst natural disaster in its history, but even as we work to rebuild, we must ensure that nothing obstructs the progress of science and technology. I am hopeful that this agreement will further the advancement of science and technology, promote international cooperation, and foster the development of the next generation of scientists.

The Advanced Science Institute's Chemical Biology Department has been a driving force in global chemical biology research. But we cannot broaden humanity's understanding of life phenomena on our own; collaboration, particularly international collaboration is essential. The RIKEN-Max Planck Joint Research Center will be involved in the active exchange of researchers and information. We expect the new center to function as a hub for collaborative research that transcends the boundaries of the disciplines covered by ASI, as well as other organizational and even national boundaries, to further the development of systems chemical biology and realize innovations in the life sciences.

Professor Herbert Waldmann This center is a novel joint research initiative between the German Max Planck Society (MPG) and its Japanese partner institution RIKEN. By means of the Joint Research Center, two MPG groups and two RIKEN groups will establish a novel platform to combine their knowledge, expertise and infrastructure and they will generate an added scientific value through the combination of complementary knowledge, methods and techniques. … My department at the MPI Dortmund has a strong expertise in the cheminformatic analysis of natural product structure, the design and synthesis of natural product-derived and inspired compound collections, their use in biochemical and phenotypic assays and the identification of their biological targets. …combining the expertise and different approaches of the Osada group at RIKEN and the Waldmann group at the MPI in Dortmund … will give access to world-class chemical biology research.

The glyco sciences have a great tradition in both Japan and Germany. One of the first Nobel Prize winners, Emil Fischer a professor at the University of Berlin at that time and a driving force behind the creation of the Kaiser-Wilhelm Society (the precursor to the Max-Planck Society) had elucidated the constitution of the hexose sugars and performed early chemical biology. In Japan, initially driven by the extraction from natural products, glycobiology saw an immensely rapid rise. RIKEN itself has been the home of one of the world's leading synthetic carbohydrate groups with giants of the field such as Professor Tomoya Ogawa (currently director of RIKEN's Wako Institute) and the outstanding teams concerned with the biological and medical aspects of the glycosciences that are lead by Professor Taniguchi. The glycosciences remain a largely unexplored frontier of the life sciences that require tools to enable exploration of a vast field full of opportunities. …an alliance between RIKEN and the MPI comes at the right time. Bringing together researchers from very different backgrounds and with different expertise to reach a common goal will provide the opportunity to tackle problems that would be otherwise impossible to consider, to make true breakthroughs and finally to create a scientific basis or another revolution in the life sciences such as the one seen in genomics. The Seeberger department will bring its platform technology - automated oligosaccharide synthesis - to the table … to better understand the structure-function relationship of carbohydrates. … We are looking forward to close personal interactions and to learn from each other.

My RIKEN team excels in isolating, identifying, analyzing and modifying natural chemical compounds and these skills have led to the creation of the NPDepo chemical bank. We have also taken the initiative in applying 2D-DIGE proteomics technology to analyze the interaction of proteins and small molecules. Professor Herbert Waldmann is an authority on synthetic chemical compounds. Combining our chemical bank with his BIOS (Biology Oriented Synthesis) library, will create a world-class library of chemical compounds. Our objective is to identify useful bioactive compounds, but we also hope to provide a stimulating environment for young researchers and university students.

We take an integrated approach to our chemical biology research. With the founding of the joint research center, we are now able to work closely with Professor Peter Seeberger and his group, the first in the world to successfully automate oligosaccharide synthesis. This cooperation will not only advance research capabilities on both sides, it will also lead us to pioneer a new research field with the development of a disease glycoprobe. Happily, our group includes a number of young and eager researchers and I look forward to significant advances in the field as they grow and develop their skills and expertise.

About the Max Planck Society

The Max Planck Society is Germany's most successful research organization. Since its establishment in 1948, no fewer than 17 Nobel laureates have emerged from the ranks of its scientists, putting it on a par with the best and most prestigious research institutions worldwide. The more than 13,000 publications each year in internationally renowned scientific journals are proof of the outstanding research work conducted at Max Planck Institutes - and many of those articles are among the most-cited publications in the relevant field. For more information, please see the website of Max Planck Society. 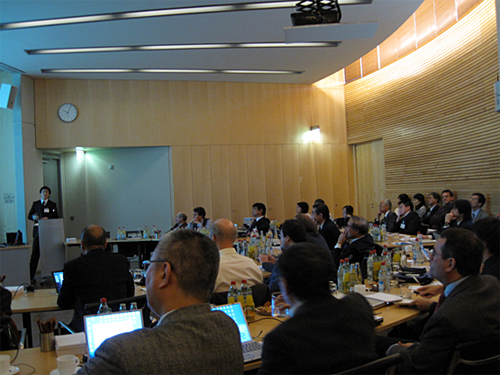 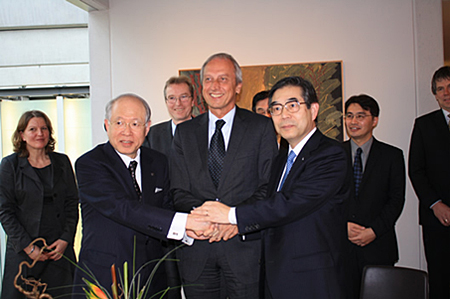 Signing of the Memorandum of Understanding for a joint research center