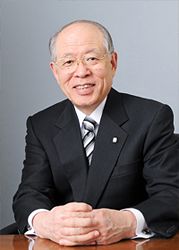 Founded in November, 1949, the Chinese Academy of Sciences is the highest-caliber research institution covering the natural sciences in China. The Academy also serves as China's leading advisory body on science and technology. Being elected as a member of the Academy is considered to be a great honor in China.

The Academy elects foreign members biannually, based on their world-class academic achievements and their contribution to science and technology in China. Professor Alan J. Heeger of the University of California, Santa Barbara (Nobel Prize in Chemistry, 2000) and Professor Daniel C. Tsui of Princeton University (Nobel Prize in Physics, 1998) are among those elected as foreign members in the past.

Currently there are 727 members and 64 foreign members of the Chinese Academy of Sciences, three of whom are Japanese. Dr. Hiroo Inokuchi (Professor Emeritus, the University of Tokyo; Former President, Okazaki National Research Institute), was elected as the first Japanese foreign member twelve years ago, and Meijo University Professor Sumio Iijima and Dr. Noyori have been newly elected. The award ceremony for new members usually takes place during the General Assembly of the Chinese Academy of Sciences and is attended by dignitaries including the Chinese President, the Chair of the Standing Committee of the National People's Congress, and the Premier of the State Council.