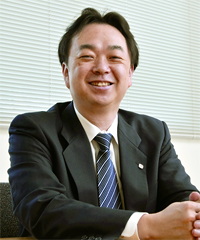 RIKEN Bioinformatics and Systems Engineering Division (BASE) Director Tetsuro Toyoda was chosen by the National Institute of Science and Technology Policy (NISTEP), an institute of MEXT, as a recipient of the NISTEP Researchers Award. The award is in recognition of Dr. Toyoda and his team's organization of an open genomic design contest in 2010 based on their pioneering SciNetS research information database.

The NISTEP Researchers Award is presented at the end of each year by NISTEP in recognition of significant contributions in science and technology. In 2011, 10 groups and 14 individuals were selected in all the categories of this Award, based on NISTEP's own research and a survey of its network of 1,740 specialists. This is the first time that a RIKEN researcher has been granted an award in the category of human resource development.

Tetsuro Toyoda was born in Tokyo, Japan, in 1968. He graduated from the Faculty of Pharmaceutical Sciences at the University of Tokyo in 1992, and obtained his PhD from the same university. He started as a researcher at the Institute of Medical Molecular Design in 1997, and joined RIKEN as team leader in the Genomic Sciences Center in 2001. He became director of the RIKEN Bioinformatics and Systems Engineering Division when it was established in 2008. His expertise is in bioinformatics and computer-aided rational design of biomolecules, including rational database-supported drug design based on protein structural information and rational genome design in synthetic biology for biomass engineering. He promotes Japan's database integration projects as a member of several national database committees.

I am very happy that our concept for open innovation of a genome-design platform has been recognized for its contribution to human resource development. We are entering an era in which research can best be promoted by making databases and infrastructure available to everyone and by encouraging open competition and the input of knowledge from large numbers of people. The closed atmosphere of the conventional laboratory in which just a few people share their ideas is no longer sufficient. Opening up our resources makes it possible for individuals around the world to test their knowledge against that of professional researchers. This not only raises the level of expertise of the participating graduate students but also serves as an excellent stimulation for RIKEN's researchers. We have even had a few high school students participate in our contest with excellent results. In fact, some, I feel, did even better than their graduate student competitors. We look forward to more young people taking up the challenge of this kind of accelerated learning program.