A new project with the goal of performing γ-ray nuclei spectroscopy has been launched bringing together the world's largest γ-ray detectors (Euroball germanium Cluster-detectors) and a radioactive beam facility boasting the world's most intense radioisotope beams (the Radioactive Isotope Beam Factory or RIBF at the RIKEN Nishina Center). The new project, named EURICA (Euroball-RIKEN Cluster Array), was commissioned on 28th March, 2012.

An international collaboration including members from more than 51 institutes across 16 countries in Europe, Asia and North America, EURICA will explore the structure of nuclei (magic number, deformation) and nucleosynthesis in supernovae explosions. The experimental stage of the project will take place from June, 2012 until the end of June, 2013, and will make use of the wide range of radioactive beams available at the RIBF.

At the heart of the EURICA project are 12 seven-element germanium Cluster detectors (84 Cluster capsules) arranged in a spherical shape, which enable identification of γ-rays emitted from radioactive isotopes (RIs) at high energy resolution and the world's highest detection efficiency. With the upgraded experimental apparatus, EURICA, combined with RIKEN's high-performance β-ray counting system and radioactive beams from the RIBF, will complete γ-spectroscopy of rare RIs in only 40 minutes, a process that would normally take a full month.

Over the span of the EURICA project (March, 2012 - June, 2013), several hundred RIs will be analyzed using spectroscopy in order to glean insights about nuclear structure and nucleosynthesis, areas that until now have been confined to theory. 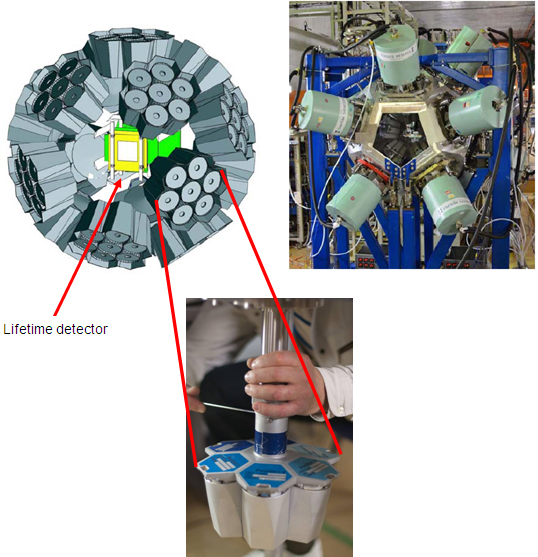 A uranium-238 beam is accelerated up to 70% the speed of light through the ring cyclotrons (IRC and SRC). The beam collides with a beryllium-9 target to produce unstable isotopes. The isotopes are sorted by their number of protons and neutrons in the BigRIPS separator. Finally, these short-lived isotopes are collided in the lifetime detector at the center of the Euroball germanium Cluster detectors, which is located the furthest downstream.