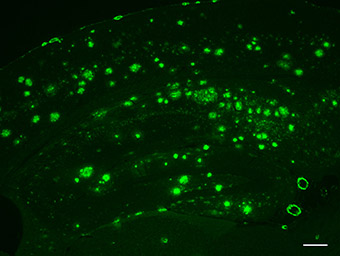 Amyloid-beta peptide in the brain of the mouse model, before gene transfer using AAV. 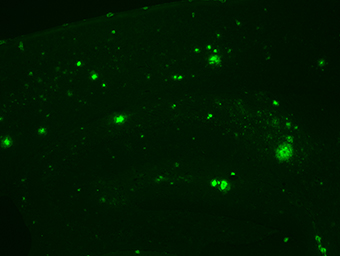 Amyloid-beta peptide in the mouse model after the gene transfer.

Researchers from the RIKEN Brain Science Institute report that they successfully used a virus vector to restore the expression of a brain protein and improve cognitive functions, in a mouse model of Alzheimer's disease.

The researchers, led by Dr Takaomi Saido, developed an adeno-associated virus (AAV) vector carrying the neprilysin gene that they administered to neprilysin-deficient mice. Because it is impossible to deliver genes directly to the brain without surgery, the researchers injected the virus in the left ventricle of the heart, as this provides a direct route to the brain.

They show that neprilysin was expressed in the brain of the mice and that this resulted in a decrease in the accumulation of amyloid-beta peptide, the protein responsible for cognitive decline in Alzheimer's patients. The researchers also observe a reduction of the symptoms associated with Alzheimer's disease in the mice, such as memory loss. These results point towards a new therapeutic strategy for Alzheimer's disease and other neurodegenerative diseases.