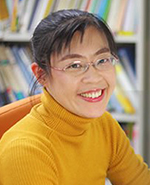 Associate Chief Scientist Emiko Hiyama of the Strangeness Nuclear Physics Laboratory in the Nishina Center for Accelerator-Based Science received the 33rd annual Saruhashi Award, a prize given to female researchers who have made remarkable achievements in the natural sciences. The Saruhashi Award was set up in 1981 by Katsuko Saruhashi (1920-2007), a geochemist who studied CO2 levels in seawater and the dangers of radioactive fallout.

Hiyama was given the award for her achievements in “developing computational methods for precise solutions of quantum n-body problems.”

The award ceremony will be held on May 25 at the Tokai University Club in Kasumigaseki, Tokyo.