In April 2013, at the start of RIKEN’s third five-year term, a new group, called the Interdisciplinary Theoretical Science team (iTHES) was launched. This is a rare type of theoretical research group, incorporating members from physics, material science, biology, and computational science.

Eager to promote advances in theoretical science through interdisciplinary collaborations, the group recently signed collaboration agreements with the Kavli Institute for the Physics and Mathematics of the Universe at the University of Tokyo, and the Osaka University Graduate School of Science.

To learn more about iTHES, we asked Group Director Tetsuo Hatsuda, a theoretical physicist, and Team Leader Atsushi Mochizuki, a theoretical biologist, to tell us a bit more about the research areas that iTHES will cover.

What themes are you addressing as theorists from different areas of RIKEN? 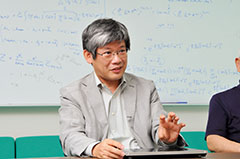 Hatsuda: Taking the example of biology, it is said that it is very difficult to understand the complex phenomena taking place at the macro level in our body through the mutual interactions between atoms and molecules at the micro level. The body is made up of an enormous number of atoms and molecules, and the combination of their mutual interactions quickly explodes into an astronomically large number. This type of “combinatorial explosion” makes the possibility of phenomena and the degrees of freedom essentially infinite.

However, in reality the atoms and molecules within our body do not exist independently of one another. Rather, they form amino acids, DNA, and proteins, then cell membranes and cell organelles, then cells, then tissues, and then organs...They form groups at different scales, and interact mutually at each level.

Mochizuki: It is generally held that as the scale increases, there is a process of “phase reduction” where there is a loss in the possibilities and effective degrees of freedom of phenomena. Consequently, even if cellular phenomena cannot be grasped at the level of atoms or molecules, they can still be understood through the mutual interactions between proteins and genes.

Hatsuda: The fact that nature organizes itself into hierarchies is true not only in biology but in physics as well. Quarks combine to form protons and neutrons, which in turn combine to form nuclei which, along with electrons, make up atoms, and atoms and molecules gather together to form stars and galaxies.

In order to understand a galaxy, it is not necessary to begin by examining quarks.

However, everything is made up of quarks and other particles, so theory that links different scales is needed to determine what kind of reduction takes place as new scales are created. In the field of physics, research has been carried out at the level of individual scales, such as quarks, atoms, stars, and galaxies. In the future, fundamental physics faces the daunting task of building theories that link these hierarchies. This “multi-scale” problem is something faced by both physics and biology. There may be useful methodologies that cross disciplinary boundaries, or theories that go beyond such borders. A major goal of iTHES is to create methodologies and theories that will open up new fields of science.

Can you explain to us your concept of “linkage logic”? 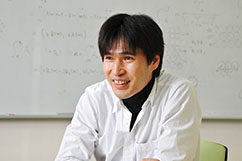 Mochizuki: It is a theoretical construct in which we try to draw out and simplify the important portions of complex networks by using mathematics. As is well known, Kyoto University Professor Shinya Yamanaka and his group discovered four important genes when doing their research on iPS cells, but if we had an adequate understanding of gene networks, we would have been able to predict this theoretically ahead of time.

We are currently working to transform cells with certain features into cells with other features, with the aim of applying this to regenerative medicine. By theoretically analyzing gene networks, we can gain the ability to theoretically predict what genes to turn on and off to convert a cell from one type to another. The field of biology, where big data is growing ever larger, offers great potential for easier prediction and validation as long as we can achieve theoretical advances.

Will it be possible to formulate theories that are valid in both physics and biology?

Mochizuki: Linkage logic is a mechanical theory that analyzes biological phenomena in terms of regulatory relations, such as how one gene can lead to another gene being shut on or off. At present, theoretical biology does not have anything more than such mechanical theories. For example, cellular function is profoundly influenced by the spatial placement of biomolecules in the cell, but this cannot be adequately described by mechanics. In order to address the challenges of multi-hierarchies in biology, we need to introduce into its theory a method other than mechanics.

Hatsuda: The concept of the renormalization group, which was proposed in the 1970s, can be applied from particles to condensed matter physics, and is one of the most important theoretical advances of 20th century physics. It is a theory of contraction that links scales together, based on the idea of coarse-graining to extract a certain portion of space-time.

Mochizuki: Unfortunately, there is no concept like the renormalization groups in contemporary biological theory.

Hatsuda: At iTHES, we are aiming to develop 21st century contraction techniques that can be used in biology as well as other fields. We are creating methods for this, including theories such as string theory that offer the potential to go beyond hierarchical and disciplinary boundaries, with the usage of the K computer.

Is nurturing young researchers part of your plans?

Hatsuda: We definitely feel a need to nurture young researchers who will develop new concepts and theories that go beyond disciplinary and hierarchical boundaries. We are planning to welcome into our ranks about 14 young researchers. By doing this, we will create opportunities for people who are at the forefront of various fields to work together in collaborative research. I think it is my mission to create places to stimulate the curiosity of young people.