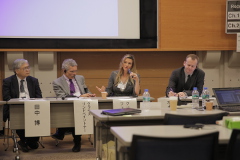 The Inaugural International Symposium of the RIKEN Preventive Medicine & Diagnosis Innovation Program was held on February 14, 2014 at the RIKEN Yokohama Branch.

The lineup of speakers included Dr. Kristi Funk, who is well known as the surgeon who performed a preventive mastectomy for actress Angelia Jolie, Bogi Eliasen, the leader of a nationwide genome sequencing project in the Faroe Islands, and Klaus Lindpaintner, an expert in pharmacogenomics.

During the symposium, Dr. Funk spoke about the Pink Lotus Breast Center which she runs together with her husband, the BRCA1 and BRCA2 gene mutations that increase the risk of developing breast or ovarian cancer, and other information relating to mastectomies. Dr. Funk stated she believes that Angelina Jolie’s announcement helped to increase awareness about hereditary breast and ovarian cancer.

The Preventive Medicine & Diagnosis Innovation Program is a new RIKEN program established in April 2013 with the aim to to conduct research and promote collaborations within RIKEN and with outside institutions with the aim to develop new drugs and diagnostic technologies for preventing diseases.