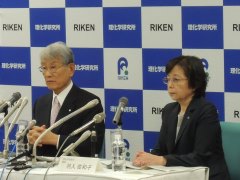 At a press conference held on RIKEN’s Wako campus on May 22, President Hiroshi Matsumoto (on the left in the photo), accompanied by Executive Director Sawako Hanyu (on the right) announced a new initiative intended to help RIKEN achieve its full potential for scientific excellence as a comprehensive research institution. The following is the text of the initiative.

To ensure that Japanese innovation promotes co-existence with nature, contributes to the progress of humanity, and helps sustain Japan as one of the world’s leading economies, RIKEN will contribute to fulfilling our nation’s science and technology strategies by realizing our full potential for scientific excellence as a comprehensive research institute.

We will work with Japan’s universities to enhance Japan’s scientific prowess, serve as a science and technology hub for research institutions and industries around the world, and achieve world-class results grounded in high ethical standards by applying the following five strategies for scientific excellence.

We will strengthen RIKEN’s headquarter functions to achieve optimal performance throughout the organization, integrate our currently divided personnel systems for permanent and fixed-term employees, introduce a new tenure-track system, and work to pioneer a new research management system that will serve as a model for all National Research and Development Institutes.

We will respond to the needs of society with forward-looking research and development by deepening our basic research efforts and actively promoting interdisciplinary undertakings. With our pioneering research groups and state-of-the-art research infrastructure, we will attract outstanding researchers from around the world capable of generating results of the highest scientific excellence.

Become a hub for science and technology innovation

We will strive for scientific excellence in close collaboration with Japan’s universities, and serve as a science and technology hub for research institutions and industries around the world to achieve advances in innovation.

Serve as a focal point for global brain circulation

We will build a world-class research environment meeting the highest global standards to attract outstanding researchers from other countries and regions, thereby making Japan a focal point of global brain circulation.

Foster the development of world-class leaders in scientific research

We will depart from strategies directed at achieving short-term results, and will design and implement a long-term, stable employment system offering attractive career paths for young researchers of superior ability. By tapping into the global exchange of personnel, we will foster the development of world-class leaders in scientific research.