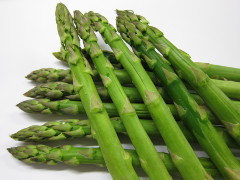 Humans have long taken note of the possible blood-pressure-lowering effects of asparagus. Going back into antiquity, it is claimed even that Egypt’s Pharaoh Akhenaten and his queen Nefertiti called asparagus a “food of the gods.” Now, on a more scientific note, scientists have determined that sulfur-containing compounds in plants can inhibit ACE, an enzyme known to contribute to hypertension.

In research published in the Journal of Natural Products, a group of scientists from the RIKEN Center for Sustainable Resource Science, along with colleagues from Chiba University, have used a field they are pioneering—targeted metabolomics—to identify a new ACE-inhibiting molecule in the asparagus, which they dubbed asparaptine.

To identify the molecule, the group used mass spectrometry—a technique that involves scanning compounds to find the molecules contained within them—and looked specifically for different molecules containing sulfur. They identified several and then screened them to test their effectiveness in inhibiting ACE. The new compound they found in asparagus spears—asparaptine—turns out to have a very high effectiveness.

According to Ryo Nakabayashi, the first author of the study, “Sulfur-containing compounds have been reported to have a range of benefits, including anti-inflammatory, anti-oxidative, and anti-cancer effects, and we are happy to have been able to use targeted metabolomics to find this new important compound. We will be able to use this efficient method to find new substances and to help get a better understanding of what plant compounds can have a positive effect on human health. We also look forward to learning more about the biological role that asparaptine plays in the asparagus.”