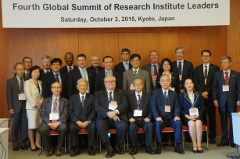 On October 3, leaders representing 18 scientific research institutes based in 13 countries around the world came to Kyoto to attend the Fourth Global Summit of Research Institute Leaders, an annual meeting that was first held in 2012. The goal of the summit is to give leaders of research institutes a forum for discussing common problems and talking about how their institutes can build strategies for cooperation to better contribute to the advancement of society.

The meeting was jointly hosted by RIKEN and the National Institute of Advanced Industrial Science and Technology (AIST), another Japanese organization, and was co-chaired by RIKEN President Hiroshi Matsumoto and Alain Fuchs, President of the Centre National de la Recherche Scientifique (CNRS) of France, with Stefan Noreen, former Swedish ambassador to Japan, acting as facilitator.

The meeting this year focused on collaboration between research institutes and universities. Beginning from a presentation by President Matsumoto, the participants discussed issues such as the funding of large-scale facilities shared by researchers from research institutes and universities, and the development of joint programs for nurturing young researchers. The meeting ended with the participants adopting a statement recognizing the importance of such partnerships and calling for increased cooperation, suggesting areas such as “sharing facilities and making joint use of personnel resources, including global exchanges of personnel, through means such as cross appointments, joint laboratories, and hosting faculty members and graduate students at research institute laboratories.”