First patient in iPS study doing well after one year 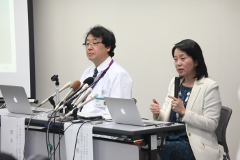 On October 2, the RIKEN Center for Developmental Biology (CDB), together with the Foundation for Biomedical Research and Innovation (FBRI) and Kobe City Medical Center General Hospital, all based in Kobe, Japan, gave an update on the first patient to undergo a transplant of iPS cells for age-related macular degeneration. The transplantation, which was performed on September 12, 2014, was part of a study, the first in the world using iPS cells in the clinic, aimed at testing the safety of the therapy in patients.

Yasuo Kurimoto of FBRI, an ophthalmologist and the head of the surgical team reported that after one year of follow-up, the patient has not experienced any major side effects, that there have not been any signs of tumor formation, and that the transplanted cells remain viable. The patient’s vision, which was deteriorating before the procedure, has remained stable since the operation. However, Dr. Kurimoto emphasized that this might be due to the removal of neovascular tissue rather than the effect of the transplanted RPE.

Masayo Takahashi of RIKEN CDB said, “We are very happy at the outcome so far as they are as we hoped. I am eager to continue moving forward until we can make this treatment available to many AMD patients.”

A more detailed report can be found on the brief report.