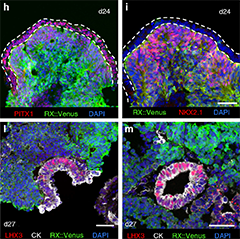 The pituitary gland is a tiny, pea-sized organ located deep inside the brain. But don’t be fooled by its size—it is vital. It is responsible for making a number of important hormones that control different bodily functions. Most of these hormones are regulated through negative feedback loops, similar to how a thermostat will turn the heat on or off depending on the temperature. When hormone levels go above a certain amount, production is shut off, and vice versa, and thus it plays the role of a sensitive hormone regulator. When the anterior pituitary gland is damaged—through tumors, infections, or even genetic factors—many different disorders can arise, some of which—like insufficient ACTH—are life threatening.

Recently, a team of scientists at the RIKEN Center for Developmental Biology was able to grow a functioning three-dimensional pituitary-like structure from human embryonic stem cells. Not only was it able to produce the correct hormones, but when transplanted into mice with dysfunctional anterior pituitary glands, it led to improved hormone regulation, rescued behavior, and extended life.

The synthesis of ACTH—the abbreviation for adrenocorticotropic hormone—is one of the anterior pituitary’s main functions. When the anterior pituitary detects the hormone CRH, it produces ACTH, which travels to your adrenal glands and causes them to release glucocorticoid steroid hormones like cortisol. Exercise or stressful situations can lead to increased production of these hormones for a short period of time, but eventually their levels in the blood are detected by pituitary cells, which causes ACTH production to be shut down, and restores ACTH balance.

Damage to the pituitary leaves the body unable to regulate the hormone properly. While hormone therapy works in some cases, the regulatory mechanism is never fixed.

In search for a fundamental remedy, the RIKEN team first recreated human pituitary embryonic development in a 3D culture. By exposing human embryonic stem cells to two key signaling molecules—hedgehog and BMP4—and by using a complex process called SFEBq, they were able to grow two structures necessary for inducing the pituitary—the oral ectoderm and hypothalamic neuroepithelia.

Next, they exposed these cells to another signaling molecule, which transformed the oral ectoderm into a 3D structure that resembles what normally becomes the pituitary. These “placodes” properly expressed pituitary markers, and subsequent testing and application of additional signaling molecules, revealed that they could produced pituitary hormones such as ACTH, growth hormone, and follicle stimulating hormone.

Different cells types produced different types of hormones, and each cell type included the proper hormone receptors needed to ensure hormonal balance. For example, cells that produced ACTH had outer receptors for both CRH and glucocorticoid steroid hormones. Like natural pituitary cells, these cells produced ACTH when they detected CRH and stopped producing ACTH when they were exposed to glucocorticoids.

Next, the team tested how whether their homegrown solution could help mice with damaged pituitary glands. They chose mice with lesions that are usually fatal because they leave the mice unable to produce enough ACTH. After transplanting the 3D pituitary placodes under the kidney capsules of these mice, they found that ACTH and glucocorticoid levels were higher than in a control group of mice with identical lesions.

They also found that the transplant could affect behavior through better hormone balance. The mice that received the transplants were more active than control mice, which is important considering that lack of ACTH makes mice and people become less physically active. In the long run, the mice receiving the transplants lived more than 3 times longer than those that did not, and the transplants were nicely integrated into their bodies.

According to Takashi Tsuji, leader of the CDB Laboratory for Organ Regeneration, “This is an exciting step forward toward our ultimate goal, which is to be able to regrow fully functioning organs in the laboratory. We will continue to push ahead with experiments to grow other parts of the body.”