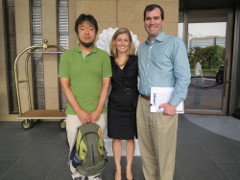 RIKEN has entered into a collaboration with the Grace Science Foundation to conduct research on NGLY1 deficiency, a rare genetic disorder that was discovered in 2012 by American doctors. NGLY1 deficiency, which is thought to be caused by a deficiency in N-glycanase-1, an enzyme encoded by the gene NGLY1, is characterized by a variety of symptoms, including global developmental delay, movement disorder, seizures, and ocular abnormalities. It is an extremely rare disorder, with less than 50 known cases in the world today.

Under the collaboration, the Grace Science Fund at the San Francisco Foundation will provide support and funding to RIKEN to gain a better understanding of NGLY1 deficiency and to look for potential therapeutic targets. Tadashi Suzuki, who is spearheading the research efforts at the RIKEN-Max Planck Joint Research Center in Japan, first identified N-glycanase-1 in mammals two decades ago. Suzuki recently discovered that a second enzyme, endo-β-N-acetylglucosaminidase (ENGase), may also be a potential therapeutic target. The project is also being supported by Hiroshi Mikitani, President and CEO of Rakuten, a major electronic commerce and internet company.

According to Matt Wilsey, President and Co-founder of the Grace Science Foundation,“I have been very impressed by Dr. Suzuki‘s 20+ years of research. I believe this collaboration with the Suzuki Lab and RIKEN will bring us closer to a cure for NGLY1 and other metabolic diseases.“

According to Suzuki, “We appreciate the support from the Grace Science Fund at the San Francisco Foundation. The Grace Science team is leading the charge to find a cure for NGLY1 deficiency. I have long been interested in N-glycanase-1, and it is a privilege that my work has been recognized as being important for the potential cure of a serious genetic condition.”