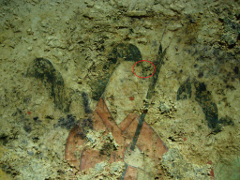 Mural painting from the Takamatsuzuka tomb. Photo courtesy of the Agency for Cultural Affairs.

Beginning in July, the Japan Collection of Microorganisms (JCM), operated by the RIKEN BioResource Center (BRC) in Tsukuba, Japan, has started offering researchers access to a collection of 730 strains of microorganisms—bacteria, molds (filamentous fungi), and yeasts—that were isolated from two 1,300-year-old Japanese tumuli (tombs). Research into these strains, which are believed to contribute to the biodeterioration of mural (wall) paintings in the tumuli, could give researchers insights into the microorganisms that contribute to these processes and help to conserve ancient cultural properties.

The microorganisms were found during work investigating and restoring mural paintings, painted over plaster, in the Takamatsuzuka and Kitora tumuli—two ancient tombs believed to have been built in the late 7th or early 8th century and located in Asuka village, Nara Prefecture. The multicolor mural paintings in the Takamatsuzuka tumulus were discovered in 1972, and attempts were made to conserve them on-site, but the conservation committee eventually decided to temporarily relocate the paintings together with the stone bases to a protective facility to save them from further deterioration. Similarly, the polychrome mural paintings in the Kitora tumulus were discovered by fiberscope in 1983. Those paintings were detached from the walls inside the stone chamber after the discovery and moved to a facility for conservation and restoration.

Researchers from the Agency for Cultural Affairs, Japan and theNational Research Institute for Cultural Properties, Tokyo originally isolated the microorganisms derived from the respective stone chamber interiors and surrounding areas for their research into the cause and mechanism of biodeterioration with the aim to design how to conserve and restore the mural paintings at the site.

The isolation of the strains led to important research on the conservation of mural paintings as well as the discovery of new species, but neither of the two research organizations can maintain the microorganisms following the completion of the research project, and a decision was made to maintain the strains at JCM rather than discard then, with the hope that they could be used in future studies in conservation science and related fields. In July, 730 strains that are considered especially important will be made available to researchers around the world for scientific studies.

The BRC-JCM is a specialized organization that collects, preserves, and distributes bacteria, archaea, yeasts, and filamentous fungi.