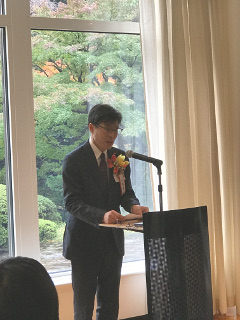 Dr. Honda giving his acceptance speech as representative of the awardees

Team Leader Kenya Honda of the Laboratory for Gut Homeostasis at the RIKEN Center for Integrative Medical Sciences in Yokohama, who also has a position Keio University, was awarded first prize in the 53th Baelz Prize. Group Director Hiroshi Ohno and Senior Visiting Scientist Koji Hase of the Laboratory for Intestinal Ecosystem, who also has a position at Keio University, were awarded second prize.

The prize is awarded based on papers that are submitted each year on a given theme. The theme this year was “Microbiome in Health and Disease,” and the award was given to Dr. Honda and his collaborators for a paper entitled, "Interface between the intestinal microbiota and the immune system: challenges for translation." which was co-authored with Professor Kiyoshi Takeda of Osaka University Graduate School of Medicine, and Drs. Ohno and Hase received the award for a paper entitled, "Host-gut microbiota interaction." 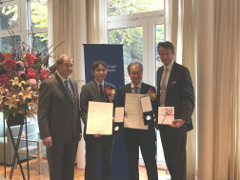