On April 26, in the presence of Their Majesties the Emperor and Empress, more than 600 guests celebrated RIKEN’s centennial at a ceremony held at the Tokyo International Forum in downtown Tokyo.

In 1917, RIKEN was established as a foundation with the mission to conduct scientific and applied research to contribute to the development of Japanese industry. It was funded by grants from the Imperial Family, donations from the private sector, and a subsidy from the government. In the years since its establishment RIKEN has functioned as a comprehensive research institute in the natural sciences, even while undergoing various transformations in structure. This ceremony is an opportunity for RIKEN to pledge to continue to contribute to the advancement of Japan's science and technology during the next hundred years, by strengthening cooperation with industry and other sectors.

After the ceremony was opened by Executive Director Yoichiro Matsumoto, President Hiroshi Matsumoto gave an address where he discussed RIKEN’s current work, and his vision for how it can build the scientific power to maximize research results over the coming 100 years in order to contribute to the continuing development of society.

In the second part of the ceremony, President Matsumoto gave a lecture outlining his vision of RIKEN’s future, and this was followed by commemorative lectures by two Nobel laureates: Takaaki Kajita, Director of the Institute for Cosmic Ray Research at the University of Tokyo, and Shinya Yamanaka, Director of the Center for iPS Cell Research and Application at Kyoto University. 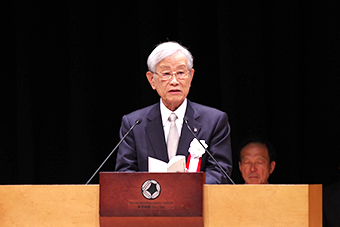 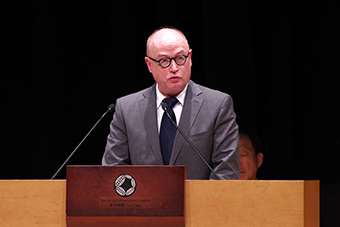