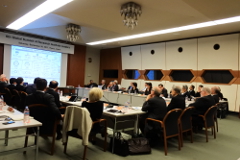 This year, the main theme of the Summit was creating sustainable societies. Initial presentations were given by Larry Marshall of Australia’s Commonwealth Scientific and Industrial Research Organization (CSIRO), and Kazuhito Hashimoto of Japan’s National Institute for Materials Science (NIMS).

In the joint statement adopted at the Summit, leaders agreed that “Research for the benefit of sustainable development will require large-scale efforts that go beyond the abilities of any single institution or nation,” and pledged to engage in such efforts, also encouraging governments to support them in this task.