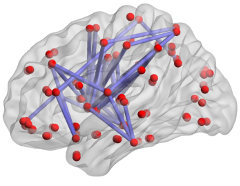 One of the dreams that could be realized with future exascale class supercomputers—meaning machines capable of performing a quintillion calculations per second—is to stimulate the activities of the 100 billion neurons in the human brain. It is a daunting task, however, and one of the major challenges is the amount of computer memory required for such simulations. Recently, an international group including Mitsuhisa Sato and Itaru Kitayama of the RIKEN Advanced Institute for Computer Science and Jun Igarashi of the RIKEN Advanced Center for Computing and Communications has used a new algorithm to make it possible to simulate the actions of neurons on a whole range of computers, from common laptops to exascale supercomputers.

The group was interested in overcoming a stumbling block involving memory usage that will make it difficult to perform such complex simulations on exascale computers. Using powerful supercomputers—the K computer in Kobe and the JUQUEEN computer in Jülich—they streamlined the process, so that there was less communication among the nodes. And according to Susanne Kunkel, an author from the KTH Royal Institute of Technology, “We realized that our novel technology would not only enable simulations on exascale systems, but would also make simulations faster on presently available computers.” According to Dr. Sato, “The study is a wonderful example of the international collaboration in the endeavor to construct exascale computers. It is important that we have applications ready that can use these precious machines from the first day they are available.”

The group plans to publish the algorithm so that researchers around the use can use it to perform better simulations. Collaborators on the project include Jakob Jordan from Forschungszentrum Jülich, Markus Diesmann of the Jülich Institute of Neuroscience and Medicine (INM-6), and Kenji Doya of the Okinawa Institute of Science and Technology (OIST). For more information see the article on the Frontiers news blog.