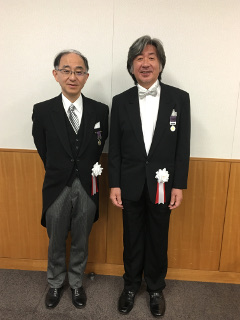 The awardees at the ceremony

Two RIKEN researchers—Group Leader Naoto Nagaosa of the Strong Correlation Theory Research Group and Team Leader Jaw-Shen Tsai of the Superconducting Quantum Simulation Research Team, both from the RIKEN Center for Emergent Matter Science, were awarded the Medal with Purple Ribbon, a Japanese government decoration awarded to people who have made notable academic or artistic achievements.

Dr. Nagaosa’s theoretical research focuses on the electronic states in solids from the viewpoint of topology and explores new functions, including non-dissipative currents. Combining first-principles electronic structure calculations, analytic methods of quantum field theory and numerical analysis of models for correlated systems, he predicts and designs magnetic, optical, transport and thermal properties of correlated electrons focusing on their internal degrees of freedom such as spin and orbital, with the aim to create novel devices such as low-energy consumption devices.

Dr. Tsai has long been involved in the experiments connected with quantum coherence in superconducting quantum systems. In this direction, his group has pioneered the science and technology of superconducting quantum computing by demonstrating the first solid-state based qubit, the first solid state quantum logic gate and a universal quantum gate.

The awards ceremony was held in Tokyo on May 15.