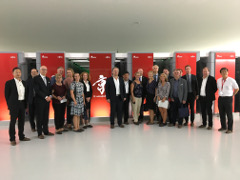 The delegation visiting the K computer

On September 6, a delegation from Denmark led by Henrik Dahl, vice chair of the Education and Research Committee of the Danish Parliament, accompanied by Ambassador to Japan Freddy Svane, visited RIKEN’s Kobe campus.

The delegation’s first tour was of the Center for Computational Science (R-CCS). Following a welcome by Kobe Branch Director Hiroshi Fukai and an overview of RIKEN by Director Atsushi Kogirima of the International Affairs Division, R-CCS Adviser Kimihiko Hirao gave them an overview of the center and showed them the K computer, a world-leading supercomputer which his center operates.

The delegation then visited the Center for Biosystems Dynamics Research (BDR). They were given a presentation of the center by Team Leader Hiroshi Hamada of the Laboratory for Organismal Patterning. Then, Unit Leader Shigehiro Kuraku of the Laboratory for Phyloinformatics introduced research on molecular evolution and bioinformatics at BDR, and this was followed by a lively discussion on research results that have been achieved thank to progress in genomic analysis and information processing technology.