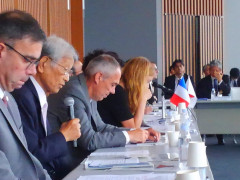 On June 27, President Matsumoto participated in a roundtable on partnerships between Japan and France hosted by the Japanese Ministry of Education, Culture, Sports, Science and Technology (MEXT) and the French Ministry of Higher Education, Research and Innovation (MESRI). Following opening remarks by MESRI Minister Frédérique Vidal and MEXT Deputy Minister Yoshio Yamawaki, a number of representatives from research institutes, universities, and funding agencies gave their own views on the current state and future of collaboration between the two countries. In his remarks, President Matsumoto said, “RIKEN places extremely high value on strengthening collaborations with Europe, including France,” and mentioned the opening of RIKEN’s Europe Office in Brussels last November.” He stressed that France is one of RIKEN’s most important partners globally, noting its ties with many organizations including CNRS and CEA, and stated that he expects to further strengthen ties in important areas such as health, AI and computational science, and sustainability.