The supercomputer Fugaku, which is being developed jointly by RIKEN and Fujitsu Limited based on Arm® technology, has taken the top spot on the Top500 list, a ranking of the world’s fastest supercomputers. It also swept the other rankings of supercomputer performance, taking first place on the HPCG, a ranking of supercomputers running real-world applications, HPL-AI, which ranks supercomputers based on their performance capabilities for tasks typically used in artificial intelligence applications, and Graph 500, which ranks systems based on data-intensive loads. This is the first time in history that the same supercomputer has become No.1 on Top500, HPCG, and Graph500 simultaneously. The awards were announced on June 22 at the ISC High Performance 2020 Digital, an international high-performance computing conference. 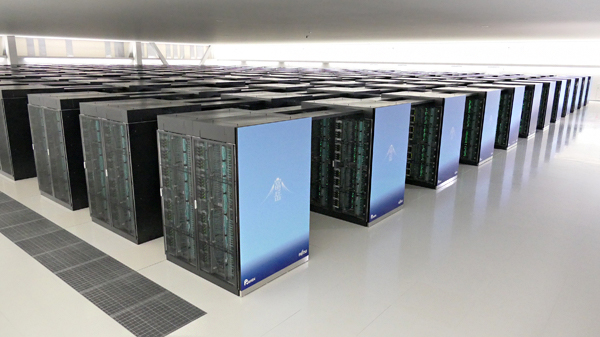 On the Top500, it achieved a LINPACK score of 415.53 petaflops, a much higher score than the 148.6 petaflops of its nearest competitor, Summit in the United States, using 152,064 of its eventual 158,976 nodes. This marks the first time a Japanese system has taken the top ranking since June 2011, when the K computer—Fugaku’s predecessor—took first place. On HPCG, it scored 13,400 teraflops using 138,240 nodes, and on HPL-AI it gained a score of 1.421 exaflops—the first time a computer has even earned an exascale rating on any list—using 126,720 nodes.

The top ranking on Graph 500 was won by a collaboration involving RIKEN, Kyushu University, Fixstars Corporation, and Fujitsu Limited. Using 92,160 nodes, it solved a breadth-first search of an enormous graph with 1.1 trillion nodes and 17.6 trillion edges in approximately 0.25 seconds, earning it a score of 70,980 gigaTEPS, more than doubling the score of 31,303 gigaTEPS the K computer and far surpassing China’s Sunway TaihuLight, which is currently second on the list, with 23,756 gigaTEPS.

Fugaku, which is currently installed at the RIKEN Center for Computational Science (R-CCS) in Kobe, Japan, is being developed under a national plan to design Japan’s next generation flagship supercomputer and to carry out a wide range of applications that will address high-priority social and scientific issues. It will be put to use in applications aimed at achieving the Society 5.0 plan, by running applications in areas such as drug discovery; personalized and preventive medicine; simulations of natural disasters; weather and climate forecasting; energy creation, storage, and use; development of clean energy; new material development; new design and production processes; and—as a purely scientific endeavor—elucidation of the fundamental laws and evolution of the universe. In addition, Fugaku is currently being used on an experimental basis for research on COVID-19, including on diagnostics, therapeutics, and simulations of the spread of the virus. The new supercomputer is scheduled to begin full operation in fiscal 2021 (which starts in April 2021).

According to Satoshi Matsuoka, director of RIKEN R-CCS, “Ten years after the initial concept was proposed, and six years after the official start of the project, Fugaku is now near completion. Fugaku was developed based on the idea of achieving high performance on a variety of applications of great public interest, such as the achievement of Society 5.0, and we are very happy that it has shown itself to be outstanding on all the major supercomputer benchmarks. In addition to its use as a supercomputer, I hope that the leading-edge IT developed for it will contribute to major advances on difficult social challenges such as COVID-19.”

According to Naoki Shinjo, Corporate Executive Officer of Fujitsu Limited, “I believe that our decision to use a co-design process for Fugaku, which involved working with RIKEN and other parties to create the system, was a key to our winning the top position on a number of rankings. I am particularly proud that we were able to do this just one month after the delivery of the system was finished, even during the COVID-19 crisis. I would like to express our sincere gratitude to RIKEN and all the other parties for their generous cooperation and support. I very much hope that Fugaku will show itself to be highly effective in real-world applications and will help to realize Society 5.0.”

“The supercomputer Fugaku illustrates a dramatic shift in the type of compute that has been traditionally used in these powerful machines, and it is proof of the innovation that can happen with flexible computing solutions driven by a strong ecosystem,” said Rene Haas, President, IPG, Arm. “For Arm, this achievement showcases the power efficiency, performance and scalability of our compute platform, which spans from smartphones to the world’s fastest supercomputer. We congratulate RIKEN and Fujitsu Limited for challenging the status quo and showing the world what is possible in Arm-based high-performance computing.”