Many plants have evolved to endure harsh environmental conditions, yet the detailed mechanisms of plant stress resistance have long remained unclear. A single plant hormone, abscisic acid (ABA), has been known to play a central regulatory role in such resistance, holding the key to advances in the development of stress-resistant crops.

In results published this month in the Proceedings of the National Academy of Sciences, research teams at RIKEN and the Japan Science and Technology Agency (JST) have for the first time unlocked the secret to ABA-mediated signaling. The teams demonstrated that a protein phosphatase (PP2C) interacts with a protein kinase (SnRK2) to regulate the elusive ABA signal transmission pathway, acting as an ON/OFF switch.

Combining this discovery with the recent finding that PP2C activity is regulated by ABA receptors (RCAR and PYR), the researchers went on to trace the ABA signal pathway itself. In conditions of high environmental stress, they showed that ABA production leads ABA receptors to suppress PP2C, which in turn results in activation of SnRK2, flipping the ABA "switch" and triggering various stress response mechanisms.

Elucidation of the mechanism underlying ABA signaling has wide-ranging implications for plant science. In addition to its role in regulating resistance to drought, salt and cold, ABA contributes to defending against disease and pests, while also functioning at various stages of plant development. Applications are anticipated in the development of stress-resistant crops, in the improvement of seed stability, and in the control of pre-harvest sprouting. 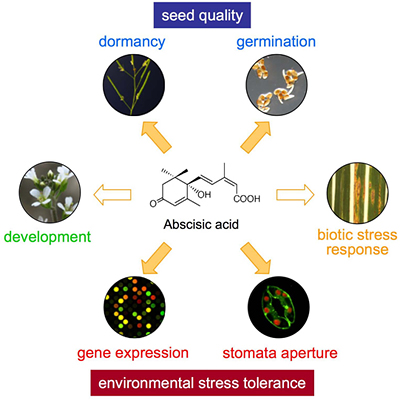 Under adverse condition such as drought or salinity, phytohormone, abscisic acid (ABA) is accumulated in plant cells. ABA induces the expression of genes that are required for stress tolerance and close stomata in order to reduce the loss of water; thereby plants become tolerant to stressful conditions. ABA also is involved in seed maturation and regulates dormancy or germination. Moreover, ABA is thought to regulate developmental processes and biotic stress responses. 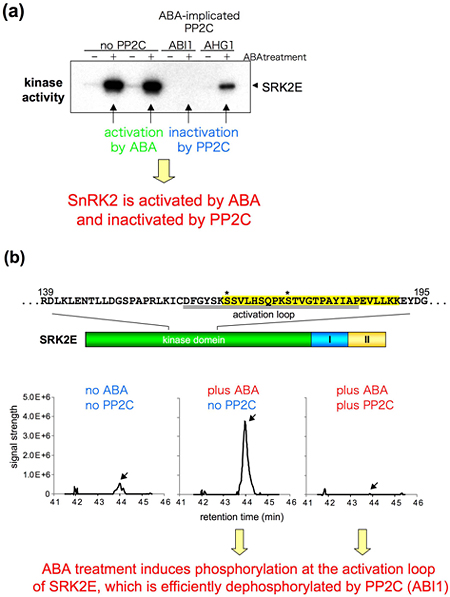 (a) SnRK2 protein was prepared from cultured Arabidopsis cells that were treated with/without ABA, incubated with a PP2C (ABI1 and AHG1) and monitored kinase activity. SnRK2 was activated in by ABA treatment and inactivated by PP2C. (b) The protein sample was analyzed with liquid chromatography and mass spectrometer to detect the phospho-peptide. The peptide corresponding to the activation loop of SnRK2 was phosphorylated in the presence of ABA. PP2C (ABI1) efficiently dephosphorylated this peptide. 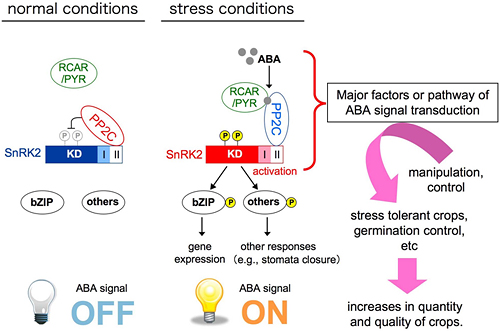