A team made up of researchers at the University of Alabama at Birmingham and RIKEN has identified the gene encoding the receptor for immunoglobulin M (IgM), a class of antibody that appears first in immune response. The landmark finding, to appear in the November 23rd issue of the Journal of Experimental Medicine (available online October 26th), promises advances in our understanding of early immune response and in the treatment of immunological diseases.

In immune systems, the function of antibodies is to bind to pathogens such as viruses and bacteria and tag them for removal. Once tagged, white blood cells such as macrophages capture and eliminate the invading pathogen using receptors on the cell surface that recognize the attached antibody.

Whereas receptors for other classes of antibodies have been studied extensively, the genetic identity of receptors for IgM (FcμR) has remained a mystery for more than 30 years despite its key contribution to early immune response and natural immunity.

To identify the FcμR gene, researchers constructed cDNA libraries from chronic lymphocytic leukemia cells, known to express high levels of IgM receptors, and introduced them into a mouse T-cell line that does not naturally bind to IgM antibodies. By analyzing the IgM-binding ability of the library-introduced T-cells, researchers were able to isolate and identify the FcμR gene.

In clarifying the molecular nature of a receptor known to profoundly influence immune response, identification of the FcμR gene fills a crucial gap in our understanding of immune systems, opening the door to new possibilities in the treatment of immune deficiencies and allergy diseases. 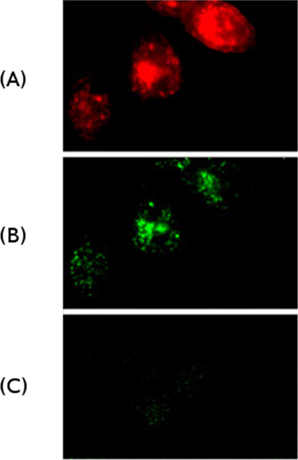 (A) Internalization of antibodies (red) that recognize the FcμR.

(B) Internalization of IgM antibodies (green).

(C) IgG antibodies (green) do not bind to FcμR and are not internalized.

Figure 2: Structure of FcμR and the proposed role of the cytoplasmic region in signal transduction

(B) Upon crosslinking of the FcμR, the serine (S) and tyrosion (Y) residues are phosphorylated, suggesting that these residues play a role in signal transduction.