A team of researchers at the RIKEN Plant Science Center and the Institute of Cancer Research has uncovered details of a protein complex governing innate immune response in plants and animals, with applications in the development of disease-resistant crops and treatment of human diseases.

To defend against foreign pathogens, plants and animals employ proteins known as immune sensors which recognize extracellular molecules and initiate immune response. Despite playing a critical in innate immunity, the underlying mechanisms governing this recognition process have remained elusive. Previous work by the team has shown that in plants, HSP90, a molecular chaperone, binds to the proteins SGT1 and RAR1 to form a complex which mediates the activity of immune sensors, but the dynamic nature of the complex has prevented a detailed understanding of its structure and role.

The researchers applied a variety of analysis techniques to overcome this challenge, each targeting different aspects of the RAR1-SGT1-HSP90 complex. Biochemical analysis identified the CHORD2 domain of RAR1 and the CS domain of SGT1 as essential to formation of the complex, while crystal structure analysis revealed that the complex is made up of six proteins in a ring configuration, with two copies of each component. Functionally, the team identified RAR1-SGT1 interaction as playing a key role in disease resistance, also providing evidence that interaction of RAR1 and HSP90 increases decomposition of ATP and boosts the efficiency of immune sensor control.

Reported in the July 30 issue of Molecular Cell, these findings provide the first detailed framework for understanding the architecture of HSP90-SGT1-CHORD protein complexes, whose role in immune defense is shared in both plants and animals. Future applications in agriculture and health promise increased crop yields through disease resistance and new treatments for human diseases. 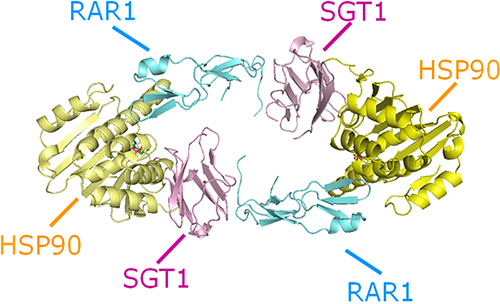 Complex consists of the HSP90-N domain (cyan), SGT1-CS domain (gold) and RAR1-CHORDII domain (magenta). The crystal structure is made up of two copies of each protein.

Figure 2: Effect of RAR1 expression on capacity of tobacco leaves to defend against viral infection

Left: When tobacco leaves whose RAR1 expression is artificially suppressed are infected with the tobacco mosaic virus, the plants are not able to stop the virus infection.

Center: When RAR1 is overexpressed, on the other hand, the plants initiate a protective response and defend against the virus.

Right: When a mutation is inserted into RAR1 proteins preventing them from binding to SGT1, then the leaves are again unable to defend against the virus (right). This demonstrates that the binding between SGT1 and RAR1 and formation of the RAR1-SGT1-HSP90 complex are essential to proper functioning of the immune censor.