Researchers at RIKEN have successfully developed a revolutionary new polymer film that changes shape upon irradiation with UV and visible light. Described in Science, the film is the largest-ever example of a material whose molecular elements are ordered in three dimensions on a macroscopic length scale, marking a breakthrough in techniques for molecular design and processing.

Living organisms depend crucially for their growth and development on their ability to assemble molecules into large, ordered three-dimensional structures. The same assembly processes offer an attractive means for designing materials and devices with novel functions, yet scientists have thus far found such processes impossible to reproduce at a macroscopic scale.

To overcome this impasse, the research group used a structure known as a "polymer brush" made up of a polymethacrylate backbone with outstretched side-chains, which together form a cylindrical shape. Azobenzene molecules, known for their propensity to deform when irradiated, were inserted into the side chains, and a free-standing cast film, created from a solution of the polymer brushes, was then tested for photomechanical response.

When no such response was initially detected, the researchers adopted a different approach, sandwiching the polymer brushes between Teflon sheets to first melt them at 130 °C, then "hot-press" them at 115 °C. The hot-pressing process, they discovered, aligned the main chains of the brushes perpendicular to the film plane, while the side chains oriented themselves horizontally along the stretching direction of the Teflon sheets. The resulting 3D molecular ordering enables the film to literally bend and stretch upon alternating irradiation by UV and visible light.

In converting light energy directly into a mechanical force, this remarkable photoresponsive bending motion breaks new ground in the study of functional materials, suggesting applications in the design of muscle-like biomorphic devices. As a technique, the combination of polymer brushes and hot-pressing vastly expands the scale at which such materials can be manufactured, promising to bring advances from the world of molecular processing to the macroscopic level of our daily lives.

Left: Molecular formulae of a polymer brush.
Center: Schematic illustration of the polymer brush.
Right: Photograph of a bottle-cleaning brush for comparison. 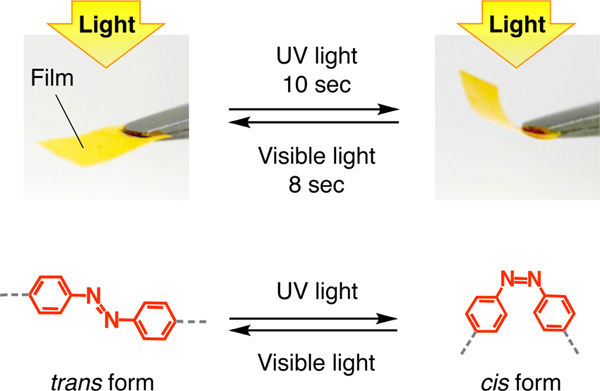