A genome-wide study by researchers at the RIKEN Center for Genomic Medicine, Hiroshima University Hospital and Sapporo-Kosei General Hospital has identified a genetic variant associated with the development of liver cancer in chronic hepatitis C virus carriers. The findings are based on a study of 3,312 Japanese individuals and appear in the journal Nature Genetics.

Hepatocellular carcinoma (HCC), the most common type of liver cancer, is the third leading cancer-related cause of death and the seventh most common form of cancer worldwide. The hepatitis C virus (HVC) is the main risk factor for HCC in many western countries and in Japan, where of the more than 30,000 deaths each year from HCC, 70% involve HVC.

To identify risk factors connecting HVC and HCC, the research group conducted a genome-wide study on a group of 3,312 Japanese individuals carrying the hepatitis C virus. Analyzing a total of 467,538 genetic markers (called single nucleotide polymorphisms or SNPs) in a group of 212 HCV carriers with HCC and 765 HCV carriers without HCC, the group uncovered one SNP associated with HCC risk, located on a gene called DEPDC5. The association was confirmed in an independent replication study on a population of 2335 HVC carriers, 710 with HCC and 1625 without HCC.

The significance of the findings was further highlighted when the researchers adjusted their results for gender, age and platelet count, revealing that among Japanese individuals with chronic HVC infection, the DEPDC5 SNP roughly doubles the odds of developing HCC.

While deepening our understanding of the mechanisms triggering HCC, the discovery of the DEPDC5 SNP locus also provides a valuable target for new therapy techniques, promising progress in the ongoing battle to overcome one of the world's most deadly cancers. 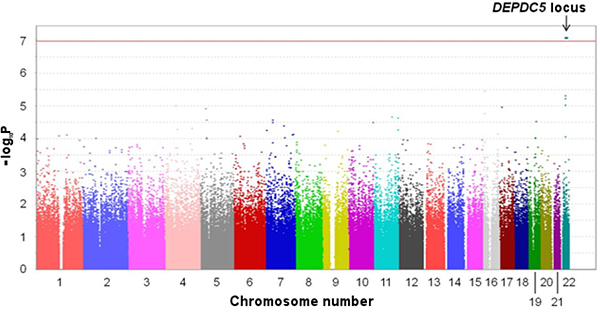 Left: Results from study of liver samples from 43 hepatitis-C carriers with liver cancer showed that DEPDC5 was more highly expressed in cancerous tissue than in non-cancerous tissue.

Right: Proportion of cases in which expression of DEPDC5 was at least five times greater in cancerous tissue than in non-cancerous tissue was high in groups that had the risk variant (TG+GG).