A new kind of quantum junction

Long predicted but never observed, coherent quantum phase slip can be harnessed to develop a novel class of quantum devices

A new type of quantum bit called a "phase-slip qubit", devised by researchers at the RIKEN Advanced Science Institute and their collaborators, has enabled the world's first-ever experimental demonstration of coherent quantum phase slip (CQPS). The groundbreaking result sheds light on an elusive phenomenon whose existence, a natural outcome of the hundred-year-old theory of superconductivity, has long been speculated, but never actually observed.

Superconductivity describes a phenomenon in which electrons pass through certain types of materials without any resistance when cooled below a given temperature. Among the most important applications of superconductivity is the Josephson junction, named after physicist Brian Josephson, who in 1962 predicted that a superconducting current could tunnel between superconductors separated by a thin insulating layer. This phenomenon, the Josephson effect, has been applied in a variety of areas including magnetometer design, voltage standardization, and quantum computing.

Coherent quantum phase slip (CQPS), as this phenomenon is known, has long been limited to theory-but no more. In a paper in Nature, Oleg Astafiev and colleagues at the RIKEN Advanced Science Institute (ASI) and NEC Smart Energy Research Laboratories report on the first direct observation of CQPS in a narrow superconducting wire of indium-oxide (InOx). The wire is inserted into a larger superconducting loop to form a new device called a phase-slip qubit, with the superconducting layer (the thin wire) sandwiched between insulating layers of empty space (Figure 2).

By tuning the magnetic flux penetrating this loop while scanning microwave frequencies, the researchers detected a band gap in the energy curves for the two flux states of the system (Figure 3), just as theory predicts. This gap is a result of quantum mechanics, which prevents the two states from occupying the same energy level, forcing them to tunnel across the superconducting layer-and through a quantum phase-slip in the narrow wire-to avoid it. While demonstrating conclusively the existence of CQPS, the successful experiment also ushers in a novel class of devices that exploit the unique functionality of quantum phase-slip to forge a new path in superconducting electronics. 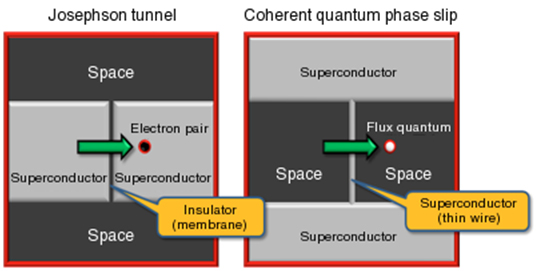 (Left): Two superconductors separated by thin insulator (in this case space). Current is produced by superconducting electron pairs tunneling across the insulator. 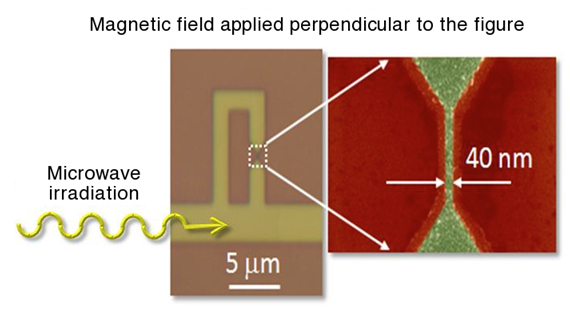 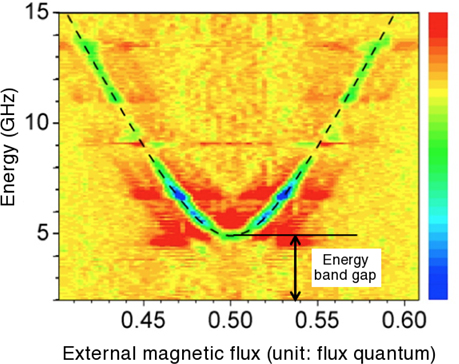 Existence of band gap establishes that coherent tunneling has occurred.