Retinoic acid gradient visualized for the first time in an embryo

In a ground-breaking study, researchers from the RIKEN Brain Science Institute in Japan report a new technique that allows them to visualize the distribution of retinoic acid in a live zebrafish embryo, in real-time. This technique enabled them to observe two concentration gradients going in opposing directions along the head-to-tail axis of the embryo, thus providing long-awaited evidence that retinoic acid is a morphogen. 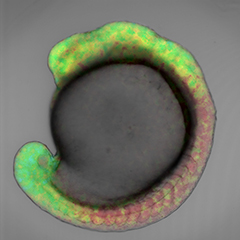 Retinoic acid has been thought to be a morphogen, a signalling molecule that diffuses throughout the embryo switching genes on and off and imparting different cell fates depending on its concentration. However, retinoic acid concentration gradients had never been visualized because retinoic acid cannot be tagged with the commonly used ‘green fluorescent protein’ GFP, or GFP-like proteins, as label.

“Until now no one had succeeded in monitoring the concentration of retinoic acid in real-time in a live embryo, and there was no direct data proving the existence of a retinoic acid gradient in the vertebrate embryo," explains Dr. Miyawaki, who led the research.

In order to monitor the concentration of retinoic acid in live zebrafish embryos at the early stages of their development, Dr. Miyawaki and his colleague Dr. Shimozono developed a technique to tag the molecule that acts as receptor for retinoic acid with genetically-encoded, coloured fluorophores. Based on the principle of fluorescence resonance energy transfer (FRET), the tags allow them to visualize the presence of retinoic acid and quantitatively determine its concentration over time.

By combining this technique with pharmacological and genetic manipulations, Miyawaki and his team demonstrate the presence of two linear retinoic acid concentration gradients across the antero-posterior axis of the embryo, from the trunk area to the head and the tail. Their findings suggest that retinoic acid diffuses quickly, thus establishing stable and robust gradients that are resistant to external perturbations.

“A better understanding of the gradients of retinoic acid is essential for research into the patterns of tissue development. It is necessary if we ever want to control the development of three-dimensional tissue structures from induced pluripotent stem cells, for regenerative medicine for example,” concludes Dr. Miyawaki. 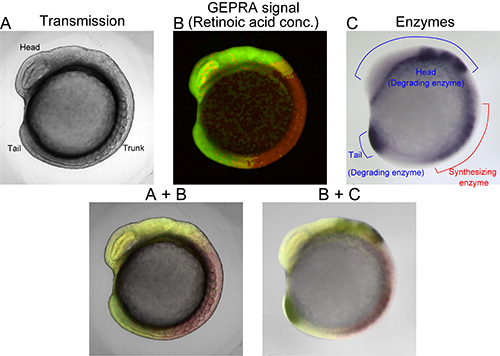