Why do babies calm down when they are carried?

Parents know that crying babies usually calm down when they are picked up and carried, but why is that? In a study published today, researchers from the RIKEN Brain Science Institute show that human babies and mouse pups alike automatically and deeply relax when they are carried.

Their study, published in the journal Current Biology, is the first one to demonstrate that the infant calming response to maternal carrying is a coordinated set of nervous, motor and cardiac regulations. Kumi Kuroda and colleagues Gianluca Esposito and Sachine Yoshida, who carried out the research, propose that it might be an evolutionarily conserved, and essential, component of mother-infant interaction.

“This infant response reduces the maternal burden of carrying and is beneficial for both the mother and the infant," explains Kuroda.

In a series of experiments involving ECG measurements the team observed that the heart rates of babies greatly slow down immediately after they are picked up and carried. But this is not the case if they are simply held. Using a very small ECG system on non-anesthetized mouse pups they were able to observe the same phenomenon in mice.

Both human and mouse babies calm down and stop moving immediately after they are carried, and mouse pups stop emitting ultrasonic cries.  Mouse pups also adopt the characteristic compact posture, with limbs flexed, seen in other mammals such as cats and lions.

The researchers determined that in mice this calming response is dependent on tactile inputs and proprioception, the ability to sense and understand body movement. They also report that it is mediated by the parasympathetic nervous system and a region of the brain called the cerebellum.

These findings have important implications for parenting and could contribute to preventing child abuse.

“Such proper understanding of infants would reduce frustration of parents and be beneficial, because unsoothable crying is major risk factor for child abuse,” says Kuroda.

“Although our study was done on mothers, we believe that this is not specific to moms and can be used by any primary caregiver,” add the authors. 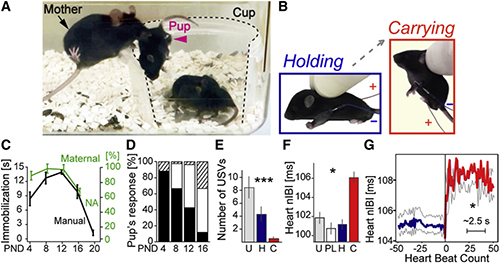 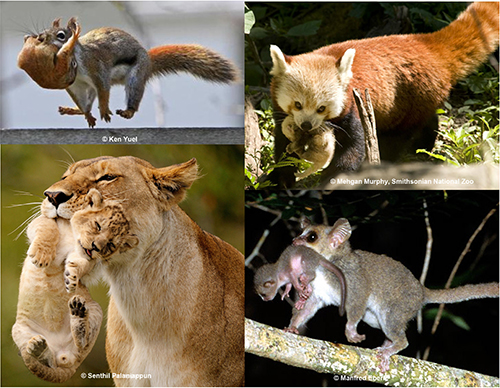