Many scientists dream of making a single discovery that provides fundamental insight into nature, may be used to help save human lives, and can assist in the preservation of an endangered species. In new research reported in the journal Cell, a Japanese team is on the verge of accomplishing this nearly impossible feat.

Unagi, the sea-going Japanese freshwater eel, harbors a fluorescent protein that could serve as the basis for a revolutionary new clinical test for bilirubin, a critical indicator of human liver function, hemolysis, and jaundice, according to researchers from the RIKEN Brain Science Institute. The discovery also sheds light on the mysterious and endangered Unagi that could contribute to its conservation.

Science from kitchen to lab to clinic

Best known as a culinary delicacy in Japan, the freshwater eel Unagi (Anguilla japonica) and related species have seen a worldwide decrease in population, probably due to the effects of global warming, and Unagi is on the brink of extinction in Japan. Yet almost nothing is know about the biology of the eel.

Drs. Atsushi Miyawaki, Akiko Kumagai and their team cloned a gene from Unagi for an unusual fluorescent protein they named UnaG, for Unagi Green protein, that allows eels to glow in the dark. UnaG is the first fluorescent protein found in vertebrates; previously they were thought to exist only in simple animals like jellyfish.

But what makes UnaG truly unique in nature is that it needs a natural chemical to activate its powerful green light emission. In a surprise twist, the compound was identified by the authors to be bilirubin, a slippery molecule universally used in clinical labs around the world as a human blood marker for liver function.

Bilirubin is the breakdown product of blood hemoglobin and is toxic if present in excess in the body like in the characteristic yellow skin and eye color conditions seen in newborn babies, jaundice and kernicterus. It is also a common marker in blood tests where bilirubin is used by doctors to assess liver function and for the assessment of health, including hemolysis, the loss of red blood cells in anemia.

By analyzing the structure of UnaG, the team discovered a novel mechanism of fluorescence enabling bilirubin to bind to UnaG and activate its light emission.  With this property, they developed a superior new assay for bilirubin with high sensitivity, accuracy and speed that may become the global clinical standard, and can be used in developing countries where child liver health is a major issue.

Role of UnaG in eel conservation

Japanese freshwater eels have a long-distance migration life cycle, growing in inland rivers and swimming far into the sea to spawn. The authors identified UnaG and bilirubin in the muscle cells of Japanese, American, and European eels where they may aid in endurance swimming during migration. The unexpected discovery of UnaG may initiate legislation to conserve endangered eel species.

“We believe that UnaG provides an unexpected foothold into several important but currently obscure areas of human health including bilirubin metabolism and muscle physiology during endurance exercise,” Miyawaki concludes. “Before the discovery of UnaG, I couldn’t imagine that basic science could have such a direct impact on human health. From a simple eel, we found a new path to the clinic.” 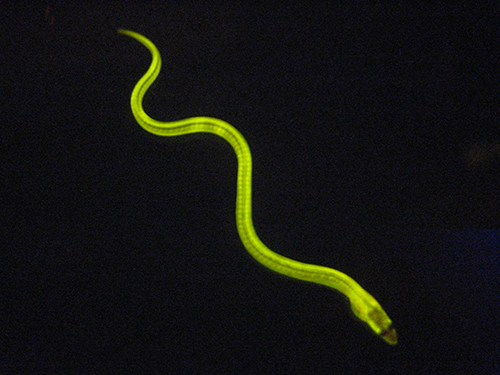 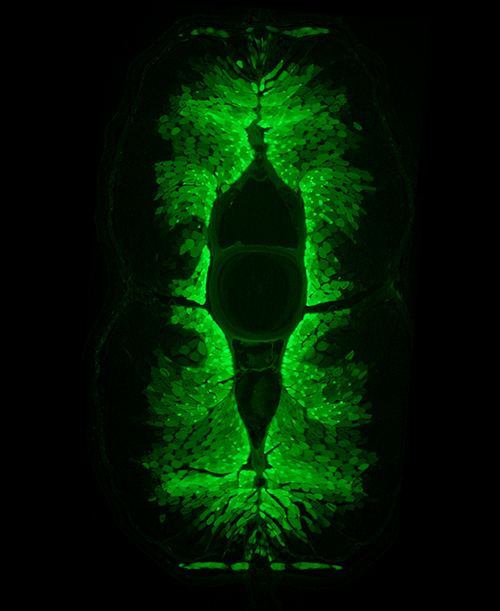 Transverse section of a formalin-fixed eel