Researchers have come one step closer to understanding unstable atomic nuclei.  A team of researchers from RIKEN, the University of Tokyo and other institutions in Japan and Italy has provided evidence for a new nuclear magic number in the unstable, radioactive calcium isotope54Ca. In a study published today in the journal Nature, they show that54Ca is the first known nucleus with 34 neutrons (N) where N = 34 is a magic number. 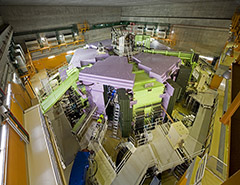 The protons and neutrons inside the atomic nucleus exhibit shell structures in a manner similar to electrons in an atom. For naturally stable nuclei, these nuclear shells fill completely when the number of protons or the number of neutrons is equal to the ‘magic’ numbers 2, 8, 20, 28, 50, 82 or 126.

However, it has recently been shown that the traditional magic numbers, which were once thought to be robust and common for all nuclei, can in fact change in unstable, radioactive nuclei that have a large imbalance of protons and neutrons.

In the current study led by David Steppenbeck of the Center for Nuclear Study, the University of Tokyo, the team of researchers focused on54Ca, which has 20 protons and 34 neutrons in its nucleus. They were able to study this nucleus thanks to the Radioactive Isotope Beam Factory (RIBF) at RIKEN, which produces the highest intensity radioactive beams available in the world.

In their experiment, a radioactive beam composed of scandium-55 and titanium-56 nuclei travelling at around 60% of the speed of light, was selected and purified by the BigRIPS fragment separator, part of the RIBF. The radioactive beam was focused on a reaction target made of beryllium. Inside this target, projectile fragmentation of the55Sc and56Ti nuclei occurred, creating numerous new radioactive nuclei, some in excited states. The researchers measured the energy of the γ rays emitted from excited states of the radioactive nuclei using an array of 186 detectors surrounding the reaction target.

The results of the experiment indicate that54Ca’s first excited state lies at a relatively high energy, which is characteristic of a large nuclear shell gap, thus indicating that N = 34 in54Ca is a new magic number, as predicted theoretically by the University of Tokyo group in 2001. By conducting a more detailed comparison to nuclear theory the researchers were able to show that the N = 34 magic number is equally as significant as some other nuclear shell gaps.

“Our new measurement provides key data for the understanding of neutron-rich nuclei and will help pin down the treatment of nuclear forces in systems far from stability,” explains David Steppenbeck.

“Enriching our knowledge of the structures of highly unstable nuclei and the nucleon-nucleon forces that drive nuclear shell evolution and the appearance or disappearance of the nuclear magic numbers in radioactive nuclei plays an important role in understanding astrophysical processes such as nucleosynthesis in stars,” he adds. 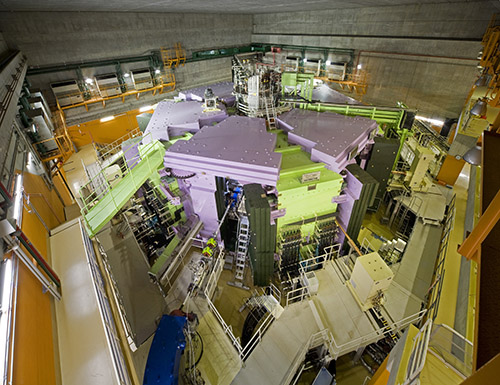 The Superconducting Ring Cyclotron (SRC) at RIBF, where the experiments were conducted