A team working at the SACLA X-ray Free-Electron Laser (XFEL) in Japan has succeeded in generating ultra-bright, two-color X-ray laser pulses, for the first time in the hard X-ray region. These light pulses with different wavelengths, whose time separation can be adjusted with attosecond accuracy, are powerful tools to investigate the structure of matter and the dynamics of ultrafast physical processes and chemical reactions. 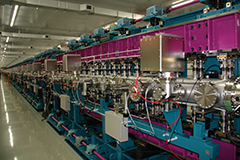 The undulators at SACLA

SACLA is one of only two facilities in the world to offer XFEL as light source to investigate matter, with various applications in biology, chemistry, physics and materials science. XFELs have the capacity to deliver radiation ten billion times brighter and with pulses one thousand times shorter than existing synchrotron X-ray radiation sources. Until now, XFELs have normally emitted one radiation pulse at a single wavelength like conventional visible lasers.

The Japanese team led by Toru Hara of the RIKEN SPring-8 Center, reports today in the journal Nature Communications that they have succeeded in creating double X-ray pulses with tunable wavelengths that can be relatively separated by more than 30%. This was achieved using variable-gap undulators, that act as a radiator and whose resonant wavelength can be largely varied by changing the magnetic field strength.

“The relative separation we have achieved is ten times bigger than what had been achieved in the past, and will make two-color lasers much easier to use as a light source. In addition, the two-color pulses can be emitted on different axes to spatially separate them. Our achievement significantly ameliorates the usability of XFEL,” explains Dr Hara.

The laser pulses, that last for less than 10 femtoseconds (10−15 s) and have peak powers of a few giga-watts, can be generated with time intervals adjusted with attosecond (10-16 s) precision.

“This will enable us to elucidate X-ray-induced ultrafast transitions of electronic states and structures, which will significantly contribute to the advancement of ultrafast chemistry, plasma physics and astrophysics, and X-ray quantum optics,” conclude the authors. 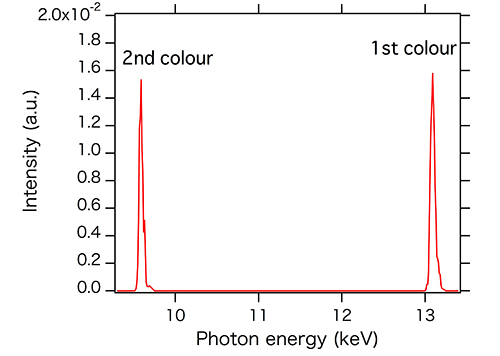 Measured spectrum of the two-color XFEL 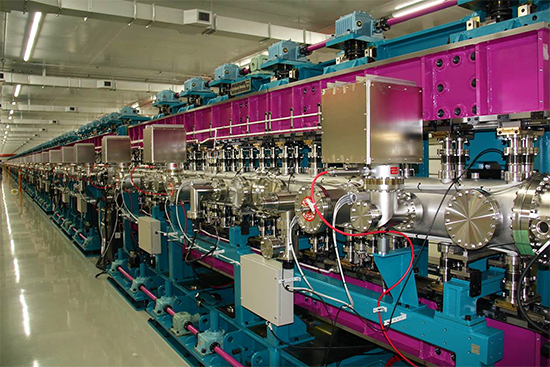