Chrono, the last piece of the circadian clock puzzle?

In an article published today in PLOS Biology, researchers from the RIKEN Brain Science Institute in Japan report the identification of Chrono, a gene involved in the regulation of the body clock in mammals and that might be a key component of the body's response to stress.

All organisms, from mammals to fungi, have daily cycles controlled by a tightly regulated internal clock, called the circadian clock. The whole-body circadian clock, influenced by the exposure to light, dictates the wake-sleep cycle. At the cellular level, the clock is controlled by a complex network of genes and proteins that switch each other on and off based on cues from their environment.

Most genes involved in the regulation of the circadian clock have been characterized, but Akihiro Goriki, Toru Takumi and their colleagues from RIKEN and Hiroshima University in Japan and University of Michigan in the United States knew that a key component was missing and sough to uncover it in mammals.

In the study, the team performed a genome-wide chromatin immunoprecipitation analysis for genes that were the target of BMAL1, a core clock component that binds to many other clock genes, regulating their transcription.

The authors characterize a new circadian gene that they name Chrono. They show that CHRONO functions as a transcriptional repressor of the negative feedback loop in the mammalian clock: the protein CHRONO binds to the regulatory region of clock genes, with its repressor function oscillating in a circadian manner. The expression of core clock genes is altered in mice lacking the Chronogene, and the mice have longer circadian cycles.

"These results suggest that Chronofunctions as a core clock repressor," conclude the authors.

In addition, they demonstrate that the repression mechanism of Chronois under epigenetic control and links, via a glucocorticoid receptor, to metabolic pathways triggered by behavioral stress.

These findings are confirmed by another study by the University of Pennsylvania, also published in PLOS Biologytoday. In the study, John Hogenesch and his team prove the existence of Chronousing a computer-based analysis. 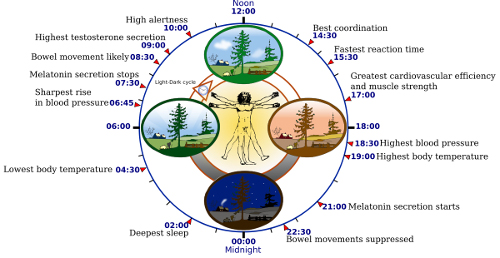 The biological clock affects the daily rhythm of many physiological processes. This diagram depicts the circadian patterns typical of someone who rises early in the morning.