Culminating an 8 year search, scientists at the RIKEN-MIT Center for Neural Circuit Genetics captured an elusive brain signal underlying memory transfer and, in doing so, pinpointed the first neural circuit for "oops"—the precise moment when one becomes consciously aware of a self-made mistake and takes corrective action.

The findings, published in Cell, verified a 20 year old hypothesis on how brain areas communicate. In recent years, researchers have been pursuing a class of ephemeral brain signals called gamma oscillations, millisecond scale bursts of synchronized wave-like electrical activity that pass through brain tissue like ripples on a pond. In 1993, German scientist Wolf Singer proposed that gamma waves enable binding of memory associations. For example, in a process called working memory, animals store and recall short-term memory associations when exploring the environment.

In 2006, the MIT team under the direction of Nobel Laureate Susumu Tonegawa began a study to understand working memory in mice. They trained animals to navigate a T maze and turn left or right at a junction for an associated food reward. They found that working memory required communication between two brain areas, the hippocampus and entorhinal cortex, but how mice knew the correct direction and the neural signal for memory transfer of this event remained unclear.

The critical experiment was to block gamma oscillations and prevent mice from making correct decisions. To do this, the researchers created a transgenic mouse with a light-activated protein called archaerhodopsin (ArchT) in the hippocampus. Using an optic fiber implanted in the brain, light was flashed into the hippocampal-entorhinal circuit, shutting off gamma activity. In accord, the mice could no longer accurately choose the right direction and the number of "oops" events decreased.

The findings provide strong evidence of a role for gamma oscillations in cognition, and raise the prospect of their involvement in other behaviors requiring retrieval and evaluation of working memory. This may open the door to a class of behaviors called metacognition, or "thinking about thinking", the self-monitoring of one's actions. Regarding the appearance of gamma oscillations in the "oops" cases, Dr. Tonegawa stated "our data suggest that animals consciously monitor whether their behavioral choices are correct and use memory recall to improve their outcomes" 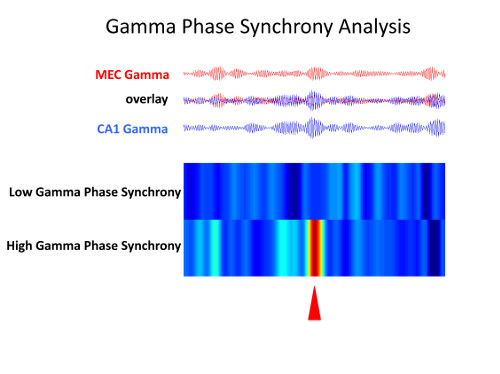 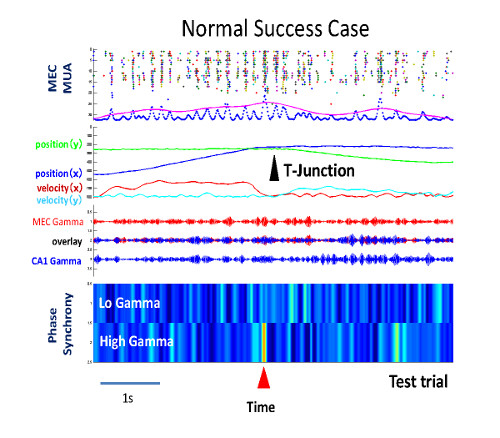 When the animal made a correct response in the working memory task, the synchrony of high gamma oscillation between entorhinal cortex and hippocampus was observed before the T-branch point of the maze (below, red arrow head). 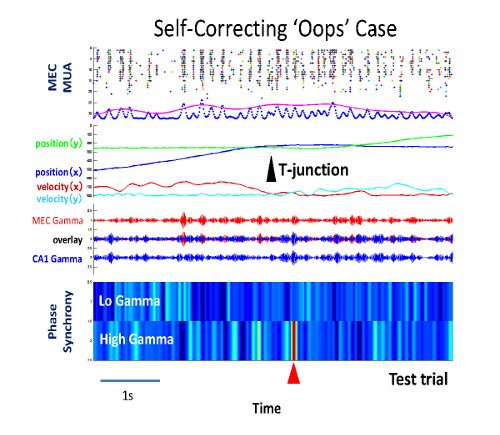 The case of self-correction in which the animal realizes it entered the wrong arm and subsequently corrects its direction. High gamma oscillation between entorhinal cortex and hippocampus was high when the animal realizes his wrong response (Oops case) rather than the T-branch point of the maze. Thus, there was a spatial and temporal shift in working memory use. 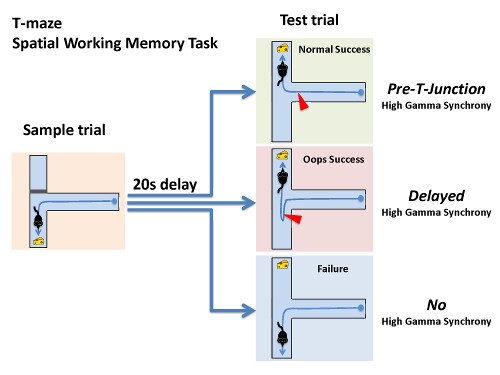 In a sample trial, the mouse is allowed to go into only one of the arm to get food (left). Soon after, the animal goes through a test trial in which the food is put in a different arm than that used in a sample trial (right). The animal must memorize the visited arm to seek food in the correct arm.