Insights into the geometry of genetic coding

When proteins are produced in cells based on the "genetic code" of codons, there is a precise process under which molecules called transfer RNA (tRNA) bind to specific amino acids and then transport them to cellular factories called ribosomes where the amino acids are placed together, step by step, to form a protein. Mistakes in this process, which is mediated by enzymes called synthetases, can be disastrous, as they can lead to improperly formed proteins. Thankfully, the tRNA molecules are matched to the proper amino acids with great precision, but we still lack a fundamental understanding of how this selection takes place.

In work published in Naturetoday, scientists from RIKEN, along with colleagues from the University of Tokyo and other institutions, have identified a surprising mechanism that allows one of these enzymes, alanyl-tRNA synthetase, to properly assemble a tRNA molecule with its cognate proper amino acid, alanine, allowing cells to accurately translate their genetic code into the proteins that are essential for biological functions.

Using crystallographic studies of molecules in a microorganism, the group, led by Shigeyuki Yokoyama of RIKEN's Structural Biology Laboratory, determined that the enzyme precisely identifies the proper tRNA thanks to a geometric feature, an arrangement of a specific base pair in the tRNA molecule that is placed in a "wobble" configuration, allowing tRNA for alanine but not for other amino acids to come into contact with the enzyme's active region. The group looked at a complex of alanyl-tRNA synthetase with the wild-type tRNA, which has a wobble base pair made up of uracil and guanine, and compared with a variant where the guanine is replaced by adenine. This tRNA variant can bind to alanyl-tRNA synthetase, but is kept separated from the active region, in what Yokoyama calls a “non-reactive state.” The overall enzyme reaction was 100 times faster in the wild-type tRNA, and it turns out that the key is a configuration change in the tRNA molecule caused by the difference in the single base pair. Thus, this small feature is exploited by the enzyme to make the recognition accurate.

According to Yokoyama, "this is a fascinating finding that may give us new insights into how living systems can so accurately translate their genetic code through processes that are at their core stochastic or random, using even small structural changes. Our work is interesting in terms of the evolution of the genetic code, since acceptor stem recognition is important for the concept of the 'second genetic code'. The findings in this paper may show a previously unknown mechanism of tRNA recognition inherited from a distant ancestor.” 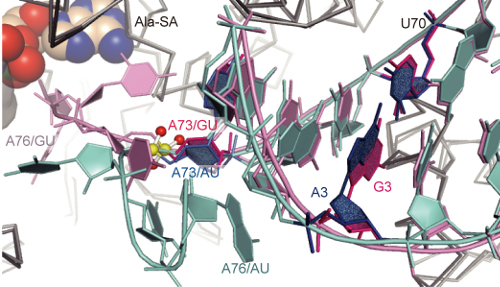 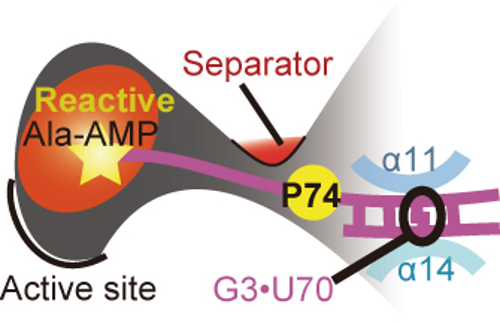 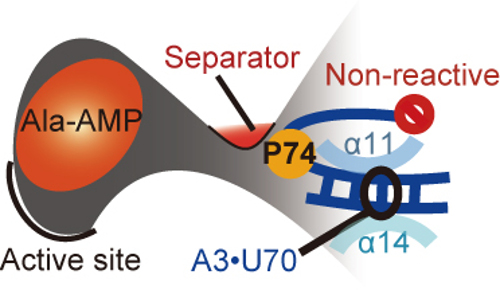 Schematic of how reactivity is prevented in the A3/U70 variant