Water splitting is one of the critical reactions that sustain life on earth, and could be a key to the creation of future fuels. It is a key in the process of photosynthesis, through which plants produce glucose and oxygen from water and carbon dioxide, using sunlight as energy. However, there are still significant mysteries about the process. Nature's own water-splitting catalysts—which are based on manganese rather than more common elements such as iron, copper, or nickel—are incredibly efficient, and scientists have long been studying why this is so and how we can mimic the natural system.

One basic riddle is why nature always uses manganese, a fact that is particularly surprising considering that manganese is rather inactive at neutral pH, which is how water is found in nature. Scientists have been able to devise many artificial manganese-based catalysts of their own, but have not been able to make them active at neutral pH. Now, in a study published in Nature Communications, a team from the RIKEN Center for Sustainable Resource Center led by Ryuhei Nakamura has reported the discovery of a mineral-based catalyst that can efficiently split water into oxygen and hydrogen ions (protons) at neutral pH.

The key to this work, according to Nakamura, was the insight, based on spectrographic findings, that the catalysis of water splitting can only be efficient if the transfer of electrons and protons is properly synchronized. Normally, artificial catalysts do not do this. With this in mind, the team devised a new strategy for remedying this mismatch of electron- and proton-transfer timing, and through it were able to achieve a significant improvement in the catalytic activity of manganese oxides at neutral pH.

Learning from nature is an important theme of this research. According to Nakamura, "The alpha-manganese oxide we used in this work is a main component of naturally occurring manganese minerals. We were surprised to discover that even mineral-like manganese oxides can split water efficiently at neutral pH once the timing of the electron and proton transfer is synchronized. This finding inspired us to think about how nature engineered the normally inactive manganese mineral to become an active catalyst for water splitting."

Renewable energy sources such as solar, wind, hydroelectric and geothermal fluctuate over time, and storing this energy is a crucial task for creating a sustainable society. Water splitting can be used to transform energy into hydrogen that can then be combined with oxygen from the atmosphere in clean fuel cells or with carbon dioxide in the oceans or atmosphere to create raw materials for hydrocarbon fuels and materials. Nakamura hopes to use this new knowledge to construct an electrochemical water splitting device that can operate at neutral pH, thus exploiting water as a resource to create new fuels.

For Nakamura, this work has exciting future potential. "As seen from a flower in a vase," he explains, "plants can use even tap water as a resource to make fuels. They do not need acid and base solutions. In other words, nature utilizes a safe, clean, and abundant form of water, thereby creating truly sustainable ecosystems. I hope that our findings will be able to contribute to the use of water at a neutral pH as a resource for generating renewable energy, which is one of the foundations for sustainable human societies." 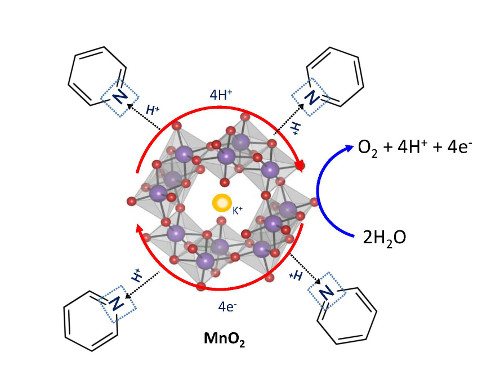 Crystal structure of alpha-MnO2, which was used for water splitting

Alpha-MnO2 is the main component of the MnO2 mineral (hollandite). Pyridine was added to optimize the timing of the electron/proton transfer timing. 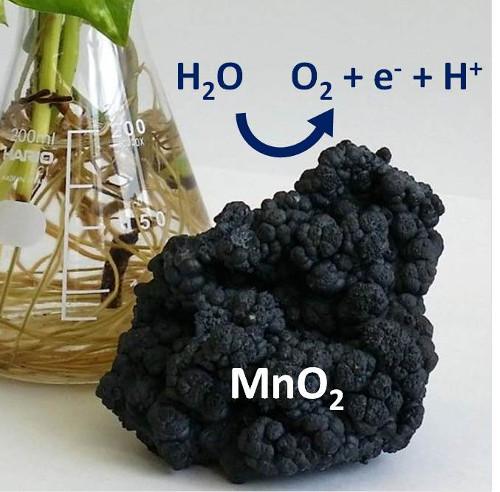 The stone in the picture is a MnO2 mineral called hollandite.